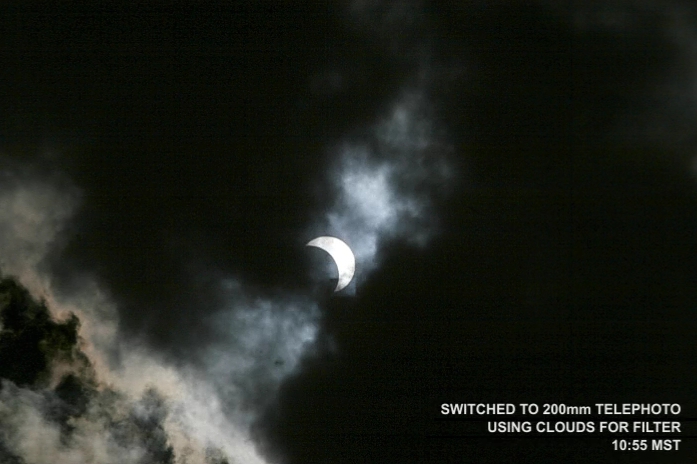 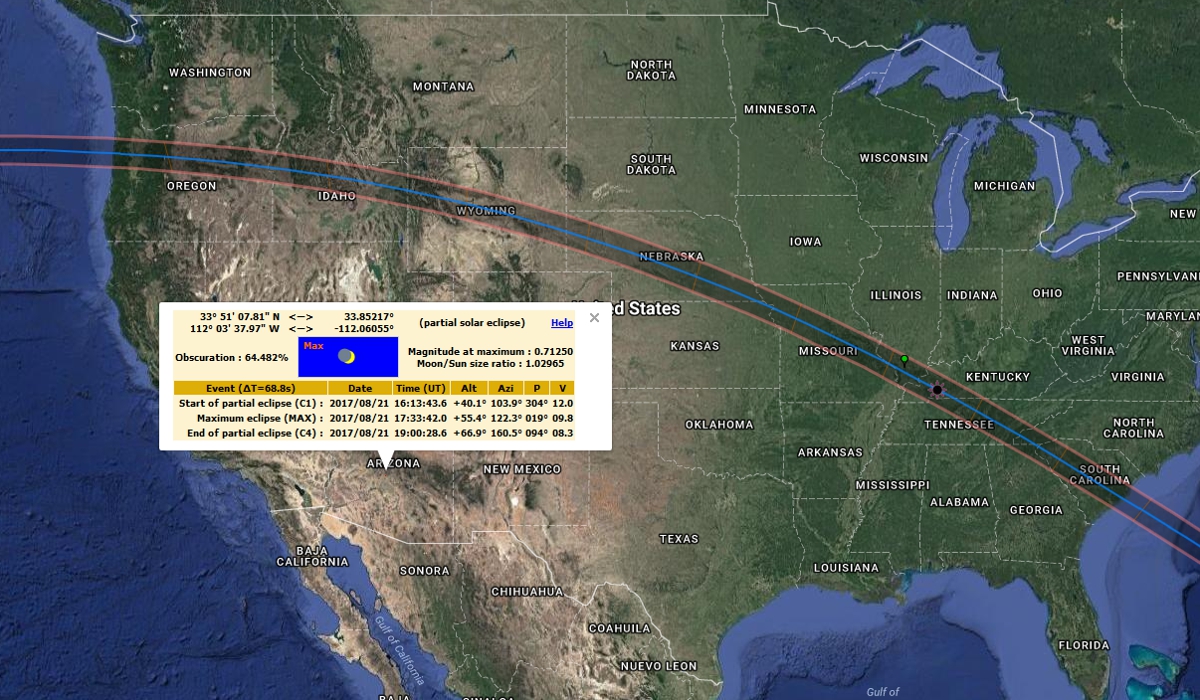 The map above, created by Xavier Jubier, shows the path of the August 21, 2017 total solar eclipse across the continental USA. Click on it to see a larger version. For the interactive version go here. This map was extremely useful to eclipse watchers when planning their observing experience. You could click anywhere on the map and get a popup with event times and geometry (as I did for my location in Arizona).

My August 14 post described plans to charter a small jet and see the eclipse from the air over Wyoming. That did not pan out. So I resolved to shoot a time-lapse sequence of the event from home instead. My telescope, solar filters, and camera were set up and aligned the day before to save time on eclipse day. I shot some practice images of the Sun to check my settings. This is how the Sun looked the day before the eclipse. You can see two “small” solar flares at the 1 and 5-o’clock positions. Click to enlarge. 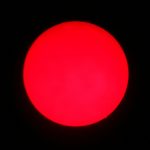 There isn’t much going on with the Sun currently. It’s in quiet mode, coming out of a minimum in its 11-year activity cycle. In addition to the two flares, there was only a single small sunspot visible but it didn’t resolve through the slight haze in the air.

Yes, the weather was creating difficulties. Shortly after capturing the above image heavier clouds moved in and it started raining. I didn’t want to disturb the alignment of the scope, so instead of bringing it inside I covered it with a tarp. Alas, it had already gotten wet — not good for things that run on electricity. The rain stopped after an hour, and my scope had all night to dry, so I wasn’t too worried about it. Now I was worried about the weather. 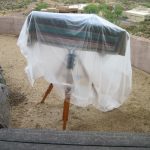 To give you an idea of how dismal the sky looked at this point, check out the sunset photo below. Beautiful colors indeed, but it didn’t bode well for Monday morning. 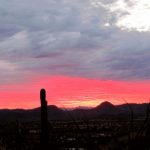 I was up early next day. The partial eclipse would begin at 09:14 MST according to Jubier’s data. The sky was clear (but still showed a slight haze), NWS satellite images looked good for approaching weather, and my scope had totally dried. I plugged it in to start tracking on the Sun and took my first image at 09:00 MST. My time-lapse sequence (at 10 minute intervals) began at 09:24 MST when the obscuration was clearly visible.

As you’ll see in the video, the clouds returned. I missed one of my scheduled time-lapse shots (10:24 MST) when a cloud passed in front of the Sun, and had to simulate that frame for continuity. I did get the 10:34 MST shot at maximum obscuration (65%).

Then it all went downhill. Cloud coverage increased so I switched to my backup plan using a 200mm telephoto on my Canon DSLR. With no solar filter I had to wait for those rare moments when the clouds provided just enough filtering to see the solar disc while still protecting the CCD in my camera from overload. Two of those shots worked out and are included in the time-lapse. You can see on those images the strange reddish color of what were previously blue-white clouds — a result of less direct sunlight and reduced blue wavelengths. In summary, I didn’t get quite what I wanted to get, but for what it’s worth here’s my results.

I mentioned how there was “less direct sunlight” during the eclipse. In Arizona, with a maximum obscuration of 65%, I couldn’t really notice that with my eyes. You need at least 90% for the effect to be visible. Nonetheless it was visible on GOES satellite images. Below are the satellite loops spanning 09:00 – 12:00 MST (images update at 30 minute intervals). The first is the GOES West loop where you can see the umbral shadow of the Moon sweep from off the coast of Oregon through Missouri. Second is the GOES Southwest loop — you don’t see the dark spot of the umbra, but penumbral dimming is obvious, as are the clouds we had to deal with here in Arizona.

This post was supposed to conclude my 4-week series on the Great American Eclipse. But I got a question from a reader yesterday asking for details about how to do solar time-lapse photography. It’s too late for this eclipse, but more are on the way, especially if you’re willing to travel. So next week I’ll review the basics of solar time-lapse photography to show you what equipment is involved and how I do it.