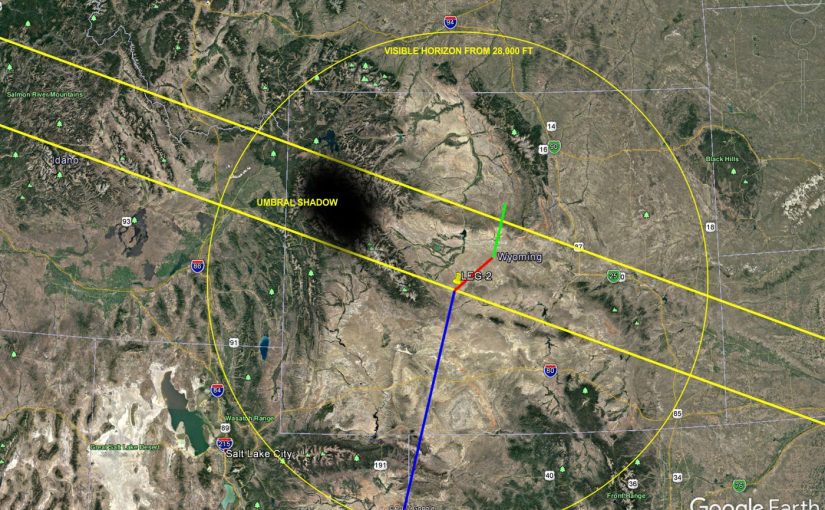 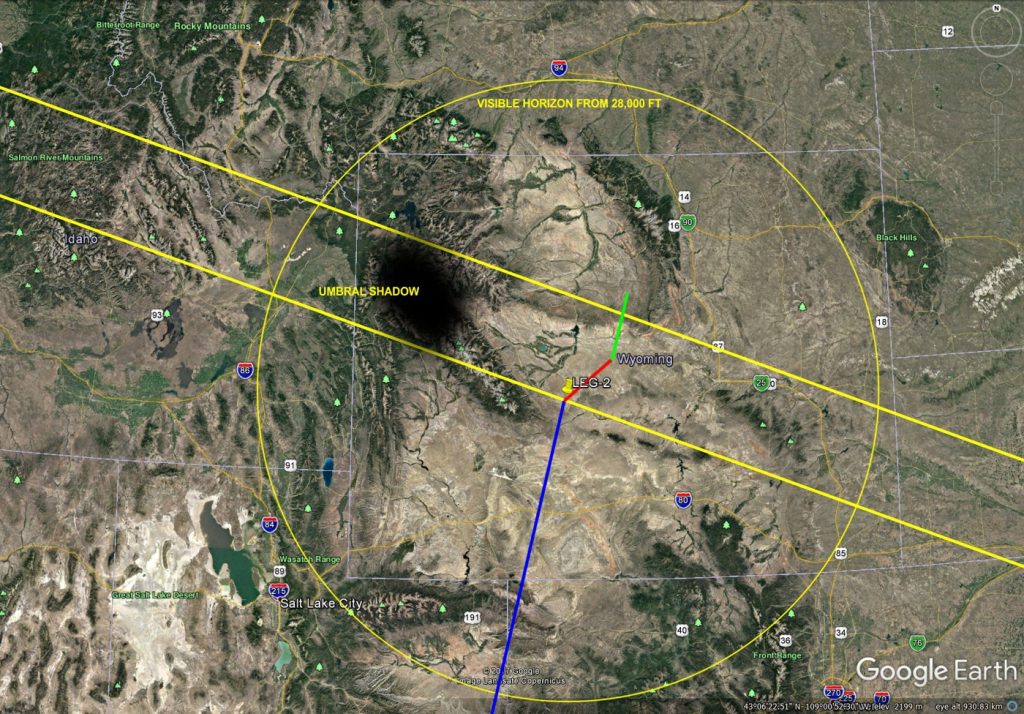 I’ve seen solar eclipses from the ground — total, annular, and partial. But for the Great American Eclipse of August 21, 2017 I had this wild scheme to observe from an aircraft over Wyoming (hopefully above any clouds). The graphic at top shows my proposed flight plan. We wanted to charter a Beechcraft King Air 200. It’s a turboprop that can cruise at 8500 m (28,000 feet) with a speed of 530 kph (330 mph). The yellow circle indicates where the horizon would be at that altitude — almost 300 km (200 miles) distant. The parallel yellow lines indicate the path of totality, and the black oval shows where the Moon’s shadow would be as we enter Leg-2 of our flight (red line). Click on that graphic for a larger view.

North is up on that map, and the eclipsed Sun would be at azimuth 139°, so Leg-2 was oriented for a view straight out the starboard windows of the aircraft. Near the end of Leg-1 (blue line) we would see the 70-mile diameter umbral shadow moving NW to SE at a speed of 2800 km/hr (1750 mph). Click on the thumbnail below to see my simulation of what that might look like. Totality would begin 2-3 minutes after entering Leg-2. On leg-3 (green line) we would watch the shadow receding to the SE. 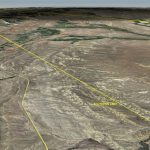 Alas, those plans didn’t work out. With a 2500 km round-trip flight from Phoenix, and two refueling stops enroute, the charter would have cost $15,000. I couldn’t find 4 fellow eclipse chasers willing to split that cost, so I’ll be observing from the ground here in Arizona. But more about that next week.

Astronomers are calling this the “Great American Eclipse” because it will be the first total solar eclipse in the continental U.S. in 38 years. The last one occurred February 26, 1979. Unfortunately, not many people saw it because it clipped just five states in the Northwest and the weather for the most part was bleak. The path traversed Washington, Oregon, Idaho, Montana, North Dakota, and Canadian provinces of Saskatchewan, Manitoba, Ontario and Quebec.

The 2017 eclipse, however, will be a US-exclusive – the first since 1776. Only those within a narrow path running from Oregon to South Carolina will be able to witness totality, but everyone else in the country (including Alaska and Hawaii) will see at least a partial eclipse. When astronomers started announcing this event a wave of eclipse tourism swept over America.

NASA will be taking advantage of this opportunity to observe the eclipse from a high-altitude jet. By chasing the shadow at near-supersonic speed they will lengthen its duration to around 7 minutes. Scientists hope to obtain data on how the Sun’s corona changes over time. Read about that exciting mission here.

Given the number of people who will be viewing this eclipse, either in the path of totality or from locations where it will be only partial, some words of caution are in order. Ignore this advice and you could damage your vision (or your camera):

Whatever your intentions for viewing this eclipse, be safe, good luck, and clear skies! And if you’re not in the right location to see this eclipse you can watch online or on TV where coverage will be continuous from start to finish. I’d recommend NASA’s site for the best video quality and educated commentary.