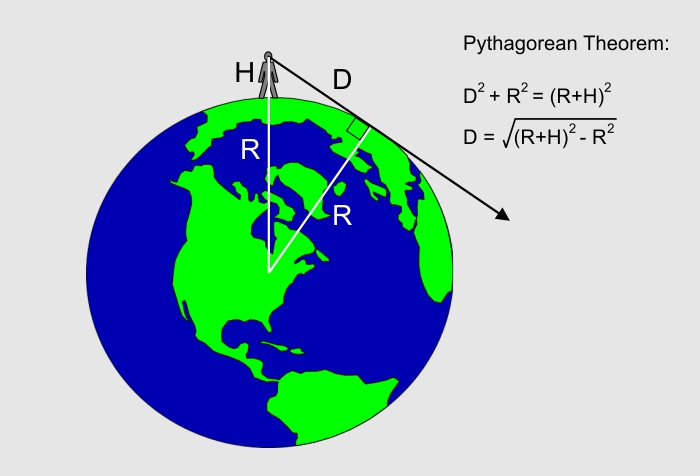 Question: I recently drove across the Great Plains in Kansas and on parts of the interstate I could see the road extending straight all the way to the horizon. Made me wonder just how many miles that was, so I picked out a distant overpass and watched the odometer. My measurement was about 2 miles. I looked it up online later and several sites said it was about 3 miles. How accurate is that? Seems like it should depend on where you are. — PS, Samos, Greece

Answer: It does indeed depend on where you are, but if you read more than just the answer you’ll see that solution applies to an average height human standing on a perfectly flat part of Earth’s surface (usually on the shore of a large body of water). The Great Plains are close enough to “perfectly flat” to see that effect, as the photo below clearly shows. You can follow that dirt road almost to the vanishing point (where the edges of the road would converge).

Here’s the data you need to calculate horizon distance D from the equation above: R = average radius of Earth = 6371 km. H = average eye height of human adult = 1.584 m. Crunching those numbers gives D = 4.493 km (2.792 miles). So yes, “about 3 km” is a good estimate — but in practice, the calculated answer is not accurate to four significant figures.

There’s several reasons for this. First, there are no sections of “perfectly flat” Earth. Even a calm body of water contains swells and tidal distortions. Second, light travels in a straight line only in a vacuum. In the atmosphere, where density decreases with altitude, light tends to refract back toward the surface allowing you to see “over” the geometric horizon. More details on that effect here. But these are both minor effects that change D on the order of tenths-of-kilometers, so to one significant figure “3 km” is still good. 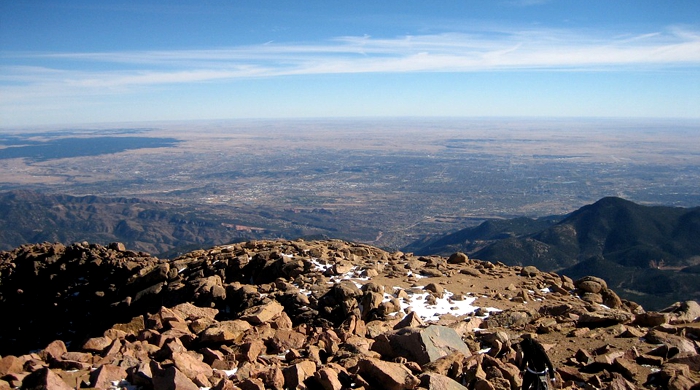 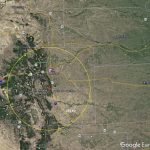 You can see that New Mexico and Wyoming (just barely) are above your horizon. That’s only 2 states. As it turns out, the simple geometry I used gives the horizon as seen from 4304 m altitude looking down on a perfectly spherical Earth with radius 6371 km. In fact, the elevations at the border of Nebraska, Kansas, and the panhandle of Oklahoma range from 1000-1500 m. That would bring these additional 3 states into view. I leave proof of this assertion as an exercise in geometry for the reader.

And there may be a 6th state visible. Refraction of light can increase the effective D by up to 8%. So on a good day, given perfect atmospheric conditions, you just might spot the NW corner of Texas.

And while we’re on the topic of horizon distance, Apollo astronauts reported an interesting illusion seen while on the lunar surface. The Moon is a smaller sphere than the Earth with a radius of only 1737 km. If you run that through the equation you’ll get D = 2.346 km (1.5 miles). In addition, there’s zero atmospheric extinction — outer space starts at ground level on the Moon, so objects on the horizon appear as visually sharp as those nearby. The result is the illusion that you’re on top a small plateau that drops off in all directions around you. The image above, from Apollo 14 in 1971, shows that effect nicely.

If this kind of topographic geometry is of interest to you, you might want to check out my Aug 4, 2014 post about how much of the Earth’s surface is visible from very high altitudes.