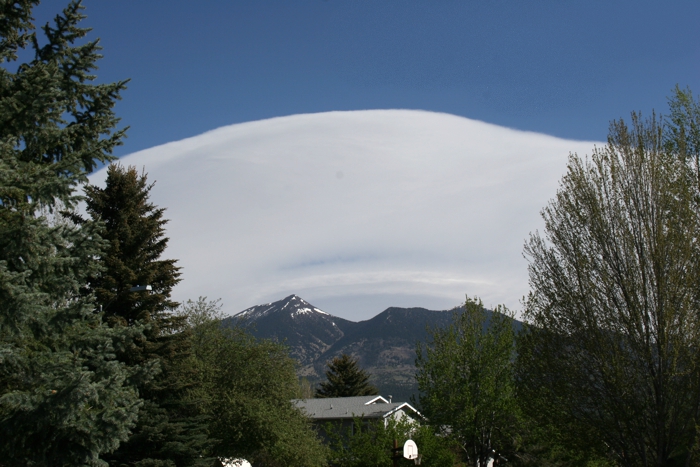 Question: I photographed this unusual cloud over the Peaks on the morning of May 6, around 9 am. Used my default lens [Canon 35-135 mm] with a little zoom. Any thoughts on this strange structure? — Roger Serrato, Flagstaff, AZ

Answer: Most definitely. What you’re seeing here is known as an orographic cloud. They form when air containing humidity is forced by prevailing winds to climb a mountain. For my non-Arizonan readers, Flagstaff is at the base of the San Francisco Peaks — the highest points in Arizona at an altitude of 3851 m (12,633 ft). The Peaks rise about 1735 m (5724 ft) above the nominal elevation of Flagstaff.

When prevailing winds force a mass of moist air to climb over those peaks, the air rises and undergoes adiabatic cooling due to expansion at lower pressures. A climb of 1735 meters will drop the pressure significantly, causing a temperature decrease of around 10-15°C. That’s often sufficient to cool the air below its dew point, causing the water vapor to condense into clouds. Here’s an NOAA graphic showing that process:

Of course, in your case the orographic cloud was not a cumulus as shown in the NOAA graphic. And you didn’t report any associated rain, so what was happening in your photo was something more like this:

With a wider angle photo, or from a greater distance, you’d have seen the abrupt cutoff on both ends of that cloud at the altitude where T = the dew point. In fact, since you were facing roughly north to take the photo, and the wind was at your back, the sharp cloud edge visible across your image was formed by exactly that process.

Whether you get a cumulus or laminar stratus (as in your photo) depends on both the topography and wind direction. Click on the thumbnail below for a satellite snapshot of the Southwest at the time you captured your photo. The yellow X marks Flagstaff. Topographic elevation rises as you travel north in Arizona, and the wind at that time was from the south carrying moisture from the Gulf of California. It was a “perfect storm” for orographic clouds. 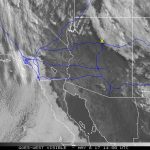 The interesting thing about orographic clouds is that, although they’re all created by the same uplift process, they can take on an amazing variety of shapes. See, for example, these images of lenticular clouds. Not surprisingly, these clouds often trigger reports of “UFO” sightings.

Thanks for the photo Roger. Beautiful shot. I always enjoy getting content from my readers.

Next Week in Sky Lights ⇒ An Impossible Sunset