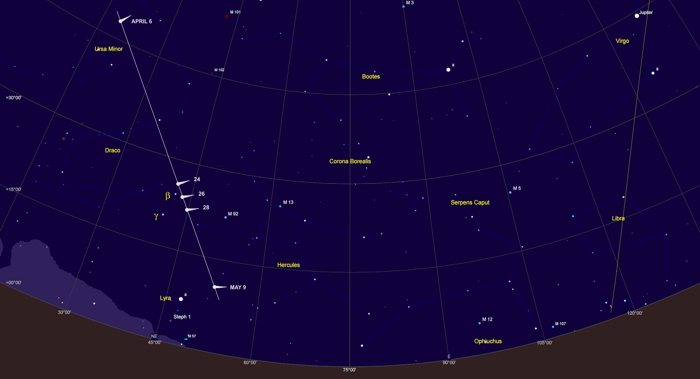 The end of April presents an opportunity to do some easy backyard astronomy. You can observe with the unaided eye, but if you have a telescope this would be a great time to haul it outside. Binoculars can also be used if deployed with a steady mount or tripod.

You can click on the chart above for a larger version. Note that the view spans a huge section of sky (hence the curved horizon) from about azimuth 30° (NNE) to 135° (SE). This was needed to include the two main “stars” of the show: Comet 41P/Tuttle-Giacobini-Kresak (the names of the co-discoverers) and Jupiter, King of the Planets.

Comet 41P has been visible for some time now. It’s been called the “April Fools Comet” by popular media. The chart shows its path from April 6 through May 9 (the predicted period of “best visibility”). As of this writing it’s shining at magnitude +8.7 — too faint for the unaided eye but accessible with binoculars. The brightness of comets is very hard to predict, but 41P has been known to flare on occasion. Astronomers estimate it could brighten to magnitude +7 or +6. 41P passed closest to the Earth on April 1, closest to the Sun on April 12, and is currently receding from Earth with its next scheduled visit in 2022. More details, and a nice orbit animation, can be found here.

The weekend of April 29-30 will be a good time to hunt for this faint comet. On those dates 41P will be located near two fairly bright stars in the constellation Draco: Beta β Draconis (magnitude +2.8) and Gamma γ Draconis (magnitude +2.4). See the large version of my sky chart for details. The two stars are separated by only 4°. If you can get those stars in your field of view, look slightly to the south and you should spot the comet.

If you do find 41P it won’t be much more than a fuzzy dot with maybe a hint of a tail. As far as comets go, 41P is not nearly as spectacular as, say, Hale-Bopp or Hyakutake. But if you’ve never seen a comet before this one should be easy to locate from the chart provided. The thumbnail below shows an April 9, 2017 image of 41P acquired through the Virtual Telescope Project — a network of online remote-controlled telescopes available for use by amateurs. The nearby galaxy is NGC 6015 in Draco. Click to enlarge. 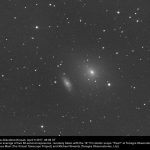 Now swing your view to the southeast at around elevation 45° and you’ll easily find Jupiter. It’ll be the brightest object in that general area shining at magnitude -2.5 in the constellation Virgo. You won’t see much with the unaided eye, but with binocs or a telescope (assuming clear dark skies) you’ll get a view similar to what’s shown below.

Jupiter is the largest planet in the Solar System, and is currently “near” Earth at a distance of 6.8×108 km (4.2×108 mi). It’s apparent size is about 44 arcseconds (a little over 1% the size of the Moon), so it will show as a fairly large striated disc even in binocs. As a bonus, you’ll see anywhere from one to four of its largest moons arrayed in a line. The moons change position hourly, so to ID them check their simulated real-time positions here.