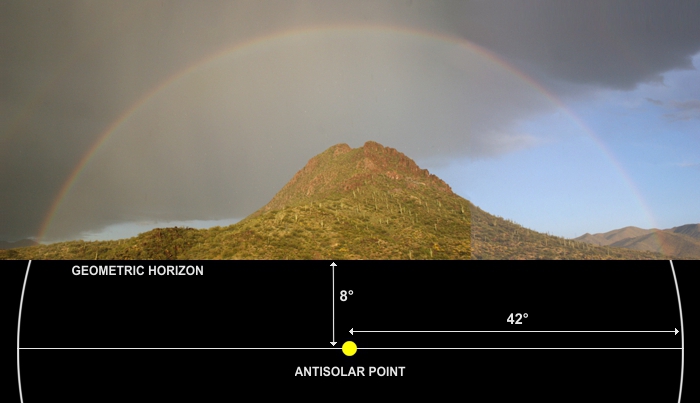 Let me say up front that the rainbow pictured above wasn’t truly “unusual.” The features I’ll point out are always present — if you know where to look. But this rainbow occurred under conditions that made these less-obvious features more visible, and in that sense it was worth a photo. Plus, it gives us an opportunity to do some geometry.

Rainbows are a common meteorological phenomenon. I’ve done several posts on this topic (search my archives), and every rainbow I see is unique in some way. This one, photographed on March 25, was no exception. It happened three days after the Spring Equinox. Ignoring my added geometry, can you spot four “unusual” rainbow features before reading further?

Rainbows can appear at just about any direction in the sky. The first feature most people notice is how the bow perfectly “frames” Gavilan Peak, a mountain 1 km east of my home. As you may know, rainbows are always seen directly opposite the Sun in the sky. This photo was taken a few days after the Equinox, thus the Sun was setting very close to azimuth 270° (due west). So alignment with the mountain was simply a matter of timing, but it does demonstrate some important rainbow geometry.

The antisolar point is an imaginary point directly opposite the Sun in the sky. The circle of the bow is always centered on that point, as shown in the geometry. This explains why you rarely see more than 180° of the full 360° circular bow — at the moment of sunset you’d see exactly 180° of the bow, and after the Sun sets the rainbow disappears. In this case the Sun is still 8° above the western horizon, so only about 164° of the full circle is visible. That’s a larger bow than average, but still fairly common.

The second feature of this rainbow is that it’s south arc is visible against what appears to be clear sky. It was, in fact, raining all around me and I had to shoot this photo from under the protection of an overhang. Rainbows can be seen in “clear” sky as long as there’s raindrops falling through the air. The south arc is less distinct because it’s photographed against a brighter part of the sky. The north arc is in front of a dark cloud which provides greater contrast.

The third feature is the secondary bow along the north arc. The secondary extends for the same 164° as the primary, but it’s too faint to see against brighter sky. Shooting the photo through falling rain further reduces the overall contrast. Click on the thumbnail below to see a closeup of the north arcs of both bows and their mirror-image spectra. 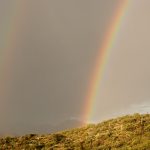 There was a window of about 10 minutes during which all this was visible. The rainbow appeared when the Sun dropped below the cloud deck, and disappeared when the Sun set. You’ll notice both shots show a distinctly sunset-reddened landscape. Note also how the spectrum of the secondary bow is reversed from that of the primary, a necessary consequence of the double reflection that creates it.

The fourth feature, like the others, is always present. But it’s much more obvious than usual in this case. Note the brighter sky just inside the primary bow, especially visible on the thumbnail against the darker background sky. This is caused by sunlight scattering directly back, without dispersion, to the observer/camera. Raindrops less than 42° from the anti-solar point will simply reflect the sunlight, not unlike a projection screen.

Next Week in Sky Lights ⇒ Jupiter and Comet 41P

Q&A: How Pi is Calculated
Jupiter and Comet 41P
HOME