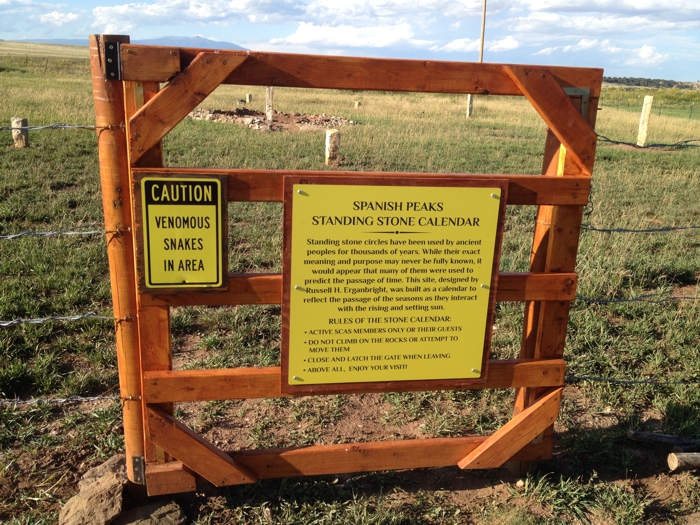 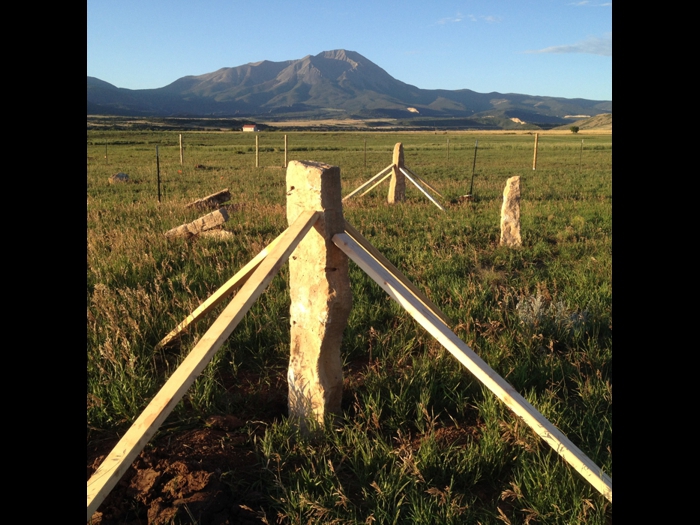 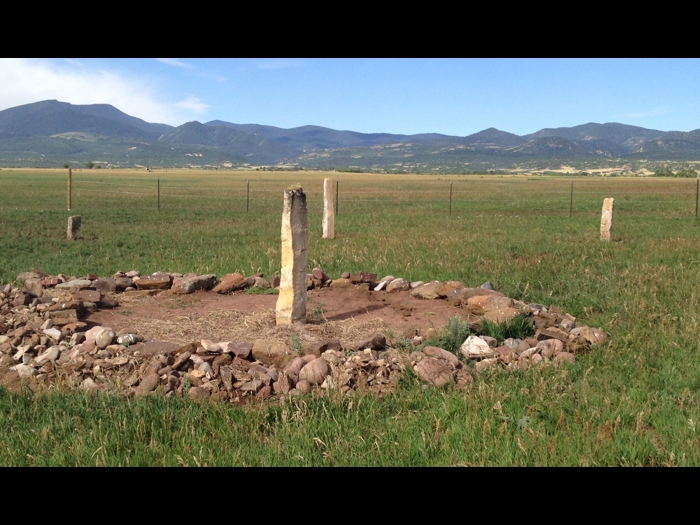 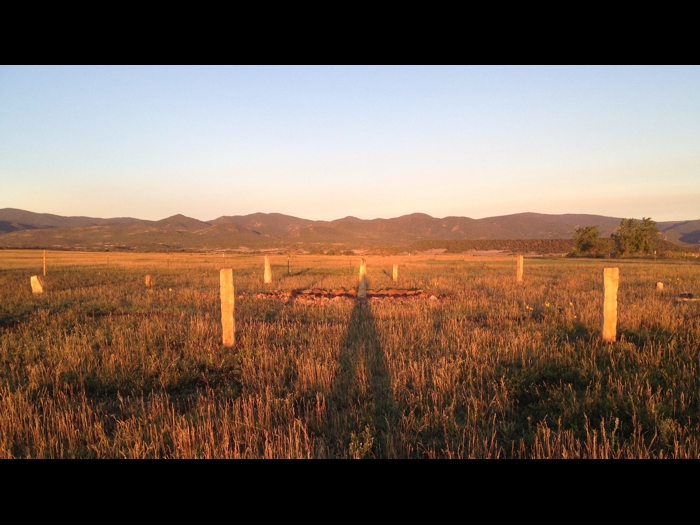 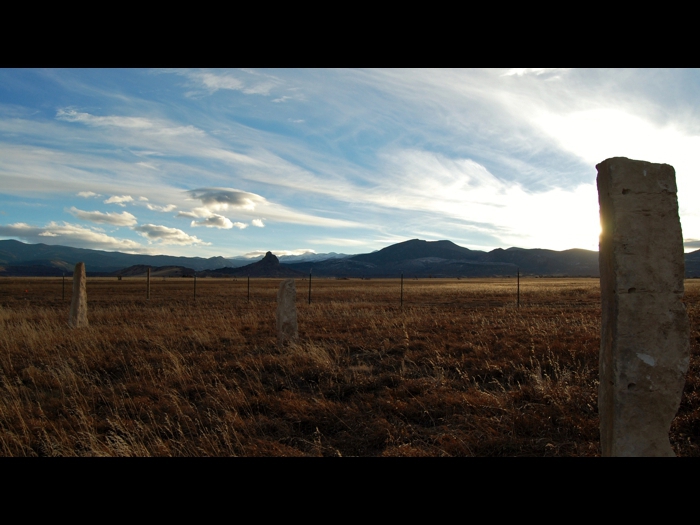 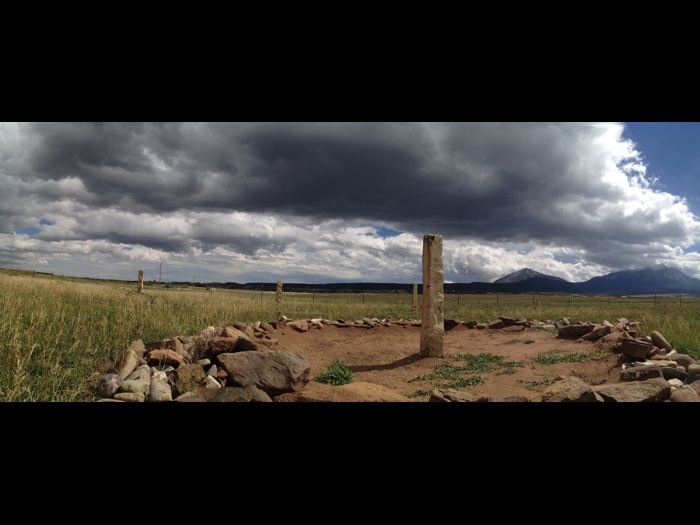 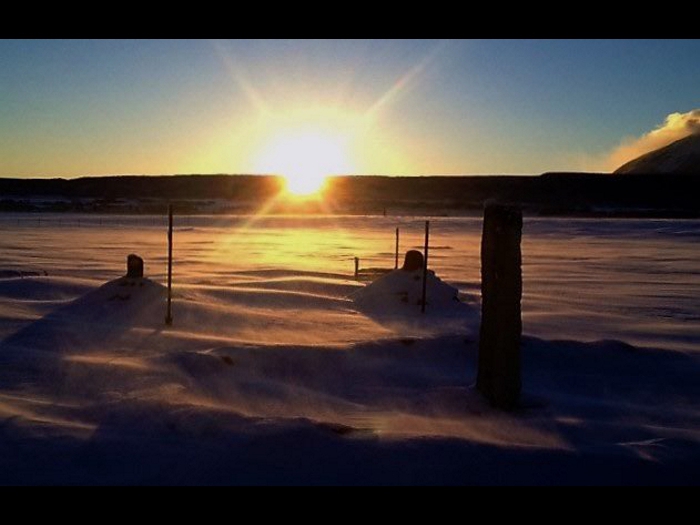 In the April 2017 Sky&Telescope magazine Focal Points column (page 84) I learned about a fascinating project in southern Colorado. You can read more about it and see a diagram of the layout here. It’s a Stonehenge-like monument called the Spanish Peaks Standing Stone Calendar. The project was the brainchild of the Southern Colorado Astronomical Society (SCAS). Russ Erganbright, SCAS Director of Ancient Astronomy, is the designer of the Calendar and author of that S&T article. He graciously provided the images for the slideshow above.

SCAS obtained 13 roughly rectangular limestone pillars donated by a property near Dodge City, Kansas. These rocks were hand-hewn by masons nearly 100 years ago and began their life as simple fence posts. The largest weighs in at around 400 pounds. They were transported by truck from Kansas to the 35 acre SCAS site just west of the town of La Veta.

The 13 stones are arranged in a circle 72 feet in diameter, with the tallest in the center and the other 12 surrounding it. From above, it looks like a 12-hour clock with stones on the hour marks. Key stones mark the position of the rising and setting Sun on the Equinoxes and Solstices. For example, as seen from the center stone, the Winter Solstice Sun rises over the “4 o’clock” stone and sets over the “8 o’clock” stone. The “12 o’clock” stone marks true north and is aligned with Polaris.

Why, you might ask, would anyone go through the effort to recreate an ancient monument just to tell what time of the year it is? After all, we now have electronic time-keeping devices to supply that information. The succinct answer is provided by Erganbright, who says it’s all about outreach. In his words:

It’s just possible, for instance, that out there right now are brilliant young minds just waiting to have their imaginations set ablaze by watching the sun rise over a standing stone circle on the summer solstice. It’s our obligation as amateur astronomers to help them along the way.

As a member of the Desert Foothills Astronomy Club I know exactly what he’s talking about. Public outreach and education is part of the agenda of most astronomy clubs. We enjoy sharing our love of the hobby and inspiring others to get involved. And that was a large part of SCAS’s motivation for building the Standing Stone Calendar. Of course, there was also the sheer fun of making it work.

The motivation for the construction of Stonehenge is a matter of debate, but archeologists are pretty sure it was built for the purpose of time keeping (ca. 3000–2000 BC). At that point in history there were no official “calendars” — the time of year was determined by the position of celestial objects. In that era, knowing when to plant, harvest, hunt, and stock up for winter was a matter of survival.

Erganbright notes that SCAS could have used high-tech instrumentation to position the stones for their calendar, but in the spirit of archeoastronomy they did all the alignments with naked-eye sightings and a measuring tape. Using hand-hewn rocks instead of steel posts also seemed appropriate. SCAS plans to add two observatories to the site, incorporating a mix of new technology with old.

When I read Erganbright’s story I had to contact him, since I did something similar when I landscaped my front yard. Mine was a much simpler effort, but you can see it here. After an exchange of several emails I decided to do this post about the SCAS project. A visit to their site is planned for the near future (when the weather gets a bit warmer). MapQuest says it’s about a 700 mile drive from here, but I’ve been promised a tour and I’m anxious to see the Standing Stone Calendar in person. If you’re interested in seeing it, or have any questions, you can contact Erganbright at:

And while you’re there, you might also see this 3D model of the original Stonehenge that I built from a kit and donated to SCAS for educational use. It’s an accurate scale model of the real thing, but it doesn’t work very well at my latitude (34° N). Stonehenge is at latitude 51°, where the Sun aligns differently. La Veta is at latitude 37.5° so the model will work slightly better there. Click on the thumbnail below to see my failed attempt at a Winter Solstice alignment. A small brass pin marks true north. The shadow angles are (not surprisingly) south of where they should be. 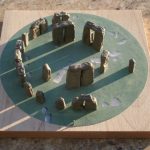 Next Week in Sky Lights ⇒ How Pi is Computed