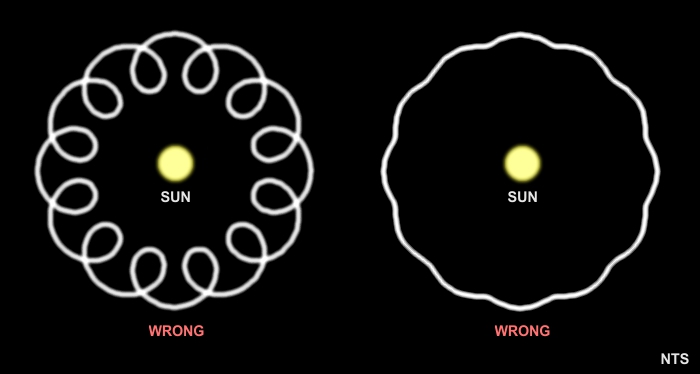 Question: Earth circles the Sun while the Moon circles the Earth. The Moon circles Earth 12-13 times a year. Even so, the two bodies are more like a double planet than a planet with a satellite. So what does the Moon’s trajectory around the Sun really look like? Some representations show their orbits are braided and neither really orbits the other. — HP, Arlington, TX

Answer: The trajectory of a body through 3D space can only be specified for a particular frame of reference (FOR). For example, in the Earth FOR the trajectory of the Moon is (as HP noted elsewhere in his question) an ellipse with eccentricity 0.0549. But if drawn to scale it would look like nearly a perfect circle to your eyes.

In the Sun FOR the situation is a bit more complicated. I’ve asked students what the Moon’s trajectory would look like in that FOR and most often they’ve drawn the “answer” at top left, and occasionally top right. Both are wrong. The Moon’s trajectory is always concave toward the Sun.

Without getting into the physics, consider that the gravitational force exerted on the Moon by the Sun is roughly twice that exerted on the Moon by the Earth — so the Sun dominates the Moon’s motion. In fact, one could say the Moon orbits the Sun, and the Earth causes a slight perturbation in the Moon’s solar orbit. Click on the thumbnail below to see a diagram of the Moon’s motion in the Sun FOR over a 2-month period. It’s a large image, and you might need to scroll to see it all, but to draw it even approximately to scale it had to be 2000×800 px. 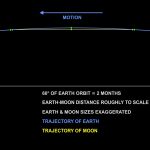 Even at that large scale the perturbation of Earth’s trajectory by the Moon (about a 3000 km “wobble”) is not visible, but it’s worth noting that effect — the Earth and Moon mutually orbit the barycenter of the Earth-Moon system. See my May 9, 2016 post for a nice animation explaining the barycenter.

Also note that the Moon’s trajectory does not consist of straight-line segments as shown. That was just the easiest way to create this graphic. In reality the trajectory is a smooth curve with “cusps” at the points where the Full Moon occurs (the points of greatest speed in the Sun FOR). In its entirety, the trajectory looks like a 12- or 13-sided polygon with rounded vertices.

Objects in orbit can make the kind of loops shown in the top left graphic. That type of curve is called an epitrochoid, but you need the right parameters to make it happen. Consider that Earth’s speed around the Sun is 30 km/s, and the Moon’s speed around the Earth is only 1 km/s. So when the Moon is New (between Earth and Sun) it’s speed in the Sun FOR will be 30 km/s – 1 km/s = 29 km/s in the same direction as Earth’s motion. When the Moon is Full its speed will be 31 km/s. That’s not enough variation to create an epitrochoid, which would require the Moon’s speed to be greater than Earth’s such that: Vearth – Vmoon < 0 at the time of New Moon.

For distant (and slower-moving) planets there are many moons that meet that criterion and follow epitrochoidal trajectories in the Sun FOR. Example: Jupiter’s speed is 13.1 km/s, and the speed of its moon Amalthea is 26.6 km/s, so when Amalthea is “new” its speed is -13.5 km/s in the Sun FOR — it would be moving in the opposite direction of Jupiter’s motion.

Next Week in Sky Lights ⇒ Telling Time by the Stars