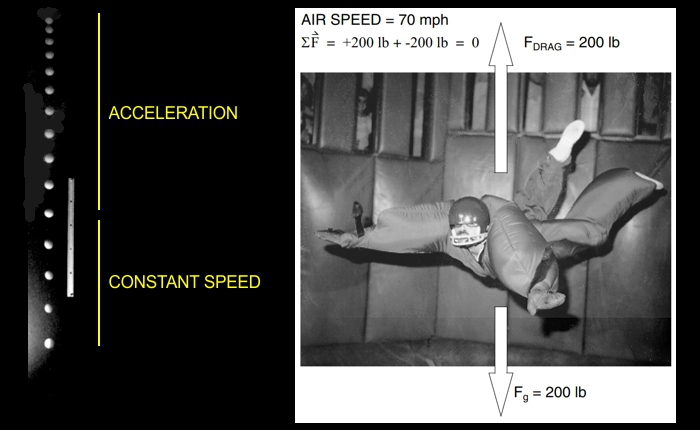 Question: We had a hail storm here last week. The weather service said the hailstones were 3 cm in diameter and were hitting with a speed of 30 m/s. Seems to me like they should be going faster since they start falling from around 4000 meters up. I got hit by some of them and it wasn’t that bad, but it makes me wonder how fast those things can go.  — WW, Bristol, UK

Answer: The speed of a hailstone is partly dependent on the wind, but most of its speed comes from the long fall between cloud and ground. We can calculate the hailstone impact speed using basic kinematics. For a vertical fall from 4000 meters that speed would be:

That’s enough energy to cause significant damage to the human body. 431 J is comparable to the energy of a bullet fired from a handgun. Fortunately, hailstones never get moving that fast — air drag acts to limit their speed to a finite terminal velocity.

The graphic is a composite of two images. On the left is a strobe photo of a falling ping pong ball. The strobe light is flashing at 10 Hz. You can see that, for the first 10 images, the distance the ball covers between flashes increases. This indicates acceleration. But for the last 5-6 images the distances are constant. This indicates uniform motion — an equilibrium state wherein the ball’s weight of 0.025 N is balanced by the upward force of air drag. Air drag reaches 0.025 N when the ball’s speed is ≈1 m/s. Strobe photo analysis confirms:

On the right is a photograph of me in a vertical wind tunnel called Flyaway, an amusement just off the Strip in Las Vegas. I am also in uniform motion (with a constant speed of zero). At a wind speed of 70 mph (113 kph) the air drag equals my weight: Fg = Fdrag = 200 lb. So I “hover” in place as the air rushes by.

The physics is the same for both the ping pong ball and my Flyaway hover. For the former, the ball is in motion and the air is at rest. For the latter, the “skydiver” is at rest and the air is in motion. In both scenarios, we have a state of equilibrium where forces in the vertical direction (drag and gravity) are equal and opposite. That is: ΣF = 0 ⇒ Δv = 0 (Newton’s 1st Law).

The ping pong ball reaches terminal velocity after falling only about 1 meter, whereas a skydiver needs to fall about 500 meters before that happens. But all objects falling through air (short of large asteroids) eventually fall with constant speed. Here’s a related riddle …

Is it more dangerous to fall from an airplane at 4000 meters altitude, or from the top of a 100 story skyscraper?

Answer: Both are equally dangerous. Because of terminal velocity, the impact speed with the ground will be the same in both scenarios. Then again, the longer fall does give you more time to say your prayers.

We can now answer your question. Hailstones also experience terminal velocity. Not surprisingly, the speed at which this occurs depends on their size. Click on the thumbnail to see a graph of average terminal velocity vs. hailstone diameter: 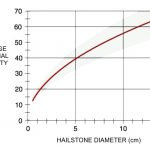 So your weather service was reporting the hail speed accurately. Those 3 cm hailstones were hitting you with a kinetic energy of only about 5 J — like a BB from a leaky air gun. That’s enough to sting, but not likely to cause any damage. Hailstones are “softer” than BBs, and they spread their impact force over a larger area.

FYI, the largest hailstone ever recorded fell in Vivian, South Dakota in 2010. It had a diameter of 20 cm and a mass of 0.88 kg (1.9 lb). Extrapolating from the chart yields a terminal velocity of about 75 m/s. That bad boy would have hit the ground with a kinetic energy of about 5000 J — enough to kill or maim anyone suffering a direct hit.

Next Week in Sky Lights ⇒ Trajectory of the Moon