Question: I read your post explaining how the ISS orbits the Earth and understand why the orbit is a circle. But when I look at ISS tracker apps that show where it is, it’s path is an undulating wave pattern. I would expect a straight line. Does this have something to do with the tilt of the Earth? Or is the ISS orbit tilted with respect to latitude? — SG, Northants, UK

Answer: I presume you are referring to my May 6, 2013 post. That page gets a LOT of hits. I think the reason so many people wonder how the ISS stays up there is because it’s so much larger than a “normal” satellite. The total mass is currently around 420,000 kg (equivalent to about 330 automobiles). That post explains how the ISS stays up, but the only thing it says about the orbit is that it’s circular. To answer your question we’ll first need to explain something called orbital inclination.

The ISS orbit is inclined to Earth’s equator by an angle of 51.65°. There were a few reasons why this particular angle was chosen, and if you’re curious about that you can read more here. The “undulating wave pattern” you ask about is a consequence of this inclination. If the ISS were in an equatorial orbit the tracker apps would indeed show a single straight line. If it were in a polar orbit, the apps would show multiple straight lines. It all comes down to a matter of perspective.

My animation shows how the ISS orbit looks in 3D. Earth is seen from the plane of its equator. North is at the exact top. Motion is sped up by a factor of 1000. Notice how the ISS never goes beyond latitude ± 51.65°, a consequence of its orbital inclination. So the ISS never gets farther north than Greenland, or farther south than Tierra del Fuego. Interestingly, both are visible from the ISS since from 350 km up the “horizon” is 2100 km away.

Notice also how, in the time it takes for one orbit, Earth rotates to the east. Because of this shifting ground track, wherever you are on Earth (between latitude ± 51.65°), at some point in time the ISS will be directly overhead. I included the HST orbit (inclination 28.5°) just for comparison. Note: It might look like the HST could collide with the ISS at this scale, but they never get closer than about 200 km. The HST is in a higher orbit and you can see that by its slightly lower speed (7.5 km/s vs. 7.7 km/s).

In ISS tracker apps (my favorite is this one), Earth is “unrolled” and displayed as a flat 2D map. The tilted circular orbit (yellow lines) now looks like the thumbnail below. Click to enlarge. 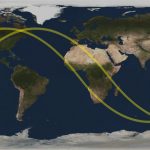 Here’s where that phase shift comes from. The ISS completes one orbit in about 1.5 hours. During that time the Earth rotates to the east by 22.5° (1.5 hr / 24 hr) × 360°. Thus, the sine wave shifts west (relative to Earth’s surface) by that amount of longitude each time around. That makes the terrestrial wavelength 337.6° and the phase shift 22.5°.

So that’s why the 2D ground tracks of most orbits look like “undulating waves.” If you’re interested in what the orbit looks like from the ISS, check out this new link. The ISS recently began streaming a live HD video view of the Earth. This “experiment” is still under development, so expect occasional outages. Also, depending on the time of day, you may get a blank night view.