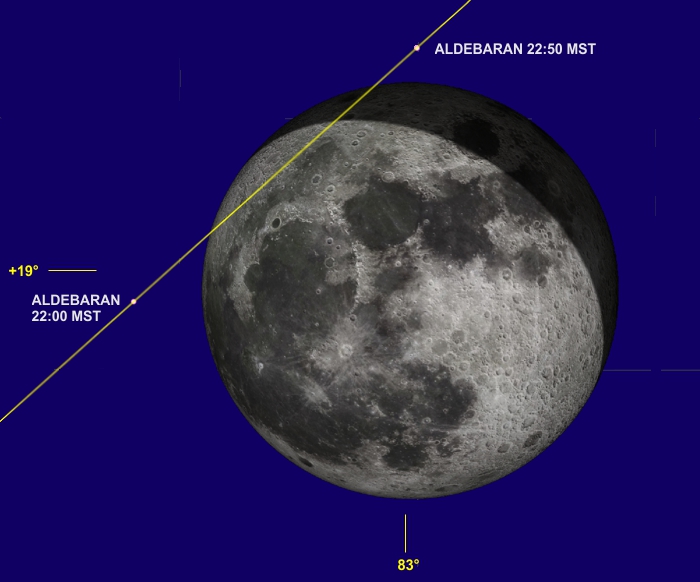 What: The bright star Aldebaran (magnitude -2.1) will be occulted by the Moon
When: Either October 18 or 19, depending on your time zone (exact times in chart below)
Where: Generally to the east … just look for the Moon

An occultation occurs when one celestial object passes behind another. The object blocked from view is said to be occulted. On October 18/19 the bright star Aldebaran in the constellation Taurus will be occulted by the waning gibbous Moon. The event will be visible from a large part of North America. The graphic above shows the view from Arizona, where the occultation starts around 22:13 MST (Oct 18) and ends around 22:42 MST. The duration of the occultation in Arizona will be ≈ 29 minutes. The Moon’s elevation (19°) and azimuth (83°) are shown for 22:00 MST — 13 minutes before occultation. By the time Aldebaran reappears, the Moon will be higher up and farther to the south.

Click on the thumbnail below to see a map of North America showing where this event will be visible. 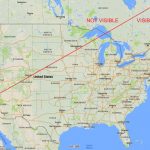 The exact times of Aldebaran’s disappearance and reappearance depend on your longitude and latitude. Check the chart below, interpolating as needed, to find the times at your location. The farther southeast you are of the red line, the deeper the passage behind the Moon. From Arizona the occultation chord will be about half a lunar diameter — fairly “shallow” as far as occultations go.

For locations farther southeast, say in Florida, the occultation chord will be longer. Above the red line, Aldebaran and the Moon will pass closely but with no occultation. On the red line, you’ll see what’s called a grazing occultation where Aldebaran skims nearly tangent to the Moon’s disc, and can blink in and out of view as it passes behind mountains along the limb (visible edge of the Moon).

If you’re fortunate enough to be in the right location at the right time, and have clear skies, you’ll see Aldebaran disappear behind the illuminated part of the lunar disc fairly abruptly. The time between first contact and disappearance will be ≤ 0.1 second.

But when Aldebaran reappears from behind the dark part of the Moon, you could see a remarkable phenomenon. The limb of the moon is not perfectly smooth. There are mountains and craters and other irregularities. So as Aldebaran “rises” you might see it blink on and off as it passes behind those features. Observing through a telescope, or even with binoculars, improves your chances of seeing this effect. In Arizona, Aldebaran will rise at an angle of ≈ 45° relative to the lunar surface, so we won’t likely see any blinking. But the closer you are to the grazing line, the more likely you will.

Compared to the planets the Moon appears pretty large in the sky. It occults stars all the time. Most of those stars are too dim to be of interest, but Aldebaran is the 14th brightest star in the sky. This event is definitely worth watching, even though you’ll need to stay up late on a weeknight to see it. And don’t forget to turn off your outside lights.

Next Week in Sky Lights ⇒ Why the Week has Seven Days

The Big Bang Blues
Q&A: Why the Week has Seven Days
HOME