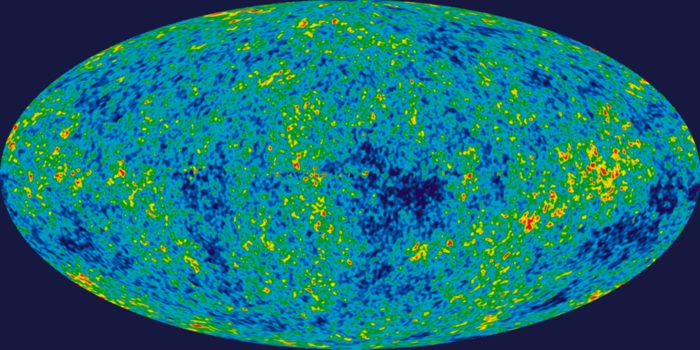 The above image, captured by NASA’s Wilkinson Microwave Anisotropy Probe (WMAP) back in 2010, shows the cosmic microwave background (CMB) at the best resolution to date. It’s a “photo” of the entire sky as seen by radio telescopes. Colors represent temperature: red is hottest, dark blue is coolest. The average temperature is 2.73 K (-270 °C or -455 °F), with the “hot” and “cold” variations just a fraction of a degree higher or lower. Think of it as a “map” of the temperature of space. Click on it for a larger version.

This heat radiation was first detected in 1964 by Arno Penzias and Robert Wilson using the Holmdel Horn Antenna at Bell Labs in Holmdel, New Jersey. At first it was thought to be just “radio noise” that seemed to come from all directions in space. In 1950, when the Big Bang theory was proposed, astronomers realized the radio energy distribution nicely fit its predictions. This radio “noise” was like an “echo” of the creation event, cooled by the expansion of space over 13.8 billion years. It’s also a “snapshot” of early structure formation in the Universe. But not all cosmologists were convinced.

The Big Bang theory claimed the Universe erupted from a single point in an explosion that created space, energy, matter, and time. This explosion is what started the expansion of the Universe, which was detected in 1920-30 by Sir Edwin Hubble. [Note: Most scientists believe the concept of time is meaningless without the existence of space, matter, and energy.]

The competing Steady State theory, proposed in 1948, claimed the expanding Universe has always existed, and is maintaining a constant density via the continuous creation of matter throughout the cosmos. New hydrogen atoms just pop into existence out of empty space. No convincing explanation was provided for the continuing expansion.

So either creation happened “all at once” or creation is an ongoing process.

At issue was the fundamental scientific concept of cause and effect: Simply stated, for every effect there must be a cause. That’s pretty hard to argue with. In the Steady State universe, the cause of the creation of new matter was thought to be the expansion of space itself, though the physical details of this process were unclear.

But the Big Bang also requires a cause, and that was harder to come by — a cause must precede its effect in time, and time as we know it did not exist before the Big Bang. The suggestion that there was a “time” when the Universe did not exist sparked countless hours of scientific and philosophical debate. Did creation “all at once” require intervention by a Deity to initiate the process? Was this what the words “Let there be light” in Genesis 1:3 are referring to? Or was the Big Bang an effect without a cause?

Presented here for your entertainment is the lighter side of that debate. It’s an “editorial poem” from the New York Herald Tribune, poking fun at the then-heated debate between Steady State proponent Sir Fred Hoyle and Big Bang proponent Dr. Martin Ryle, both then at Cambridge. It was written by columnist Art Buchwald and published on February 16, 1961. The poem is a nostalgic look back to a time when the Big Bang was still just a contender.

It’s worth noting that both theories were valid solutions for Einstein’s field equations, but hard data for either theory was lacking — until the Holmdel discovery.

Said Ryle to Hoyle, “Please do not boil.
The world began with a bang.”
Said Hoyle to Ryle, “Well boil my bile,”
Your theory just doesn’t hang.”

Said Ryle to Hoyle, “Do not recoil,”
I tell you it is so.”
Said Hoyle to Ryle, with a cynical smile,
“Best check your radio.”

Said Ryle to Hoyle, “After all my toil
I’ve proof of what I know.”
Said Hoyle to Ryle, “I’ve seen your file,
And the stars say it’s not so.”

Said Ryle to Hoyle, “Don’t try to spoil
My fondest galaxies.”
Said Hoyle to Ryle, “That’s not my style,
To kill your theories.”

“But Ryle,” said Hoyle, “you’re full of oil
To spread your Big Bang tale.”
“Really?” said Ryle, “We’ll see in a while
Whose figures will prevail.”

Now if Ryle is riled and Hoyle is roiled
Then X will equal Z.
And if Hoyle is foiled and Ryle’s not wild,
Then God really did make that tree.

As of this writing in 2016, the vast majority of cosmologists reject the Steady State theory and accept some variation of the Big Bang theory. Dark matter and dark energy have recently complicated the models, but the best current data still point to a Big Bang that happened some 13.8 billion years ago. Hoyle is foiled.

Next Week in Sky Lights ⇒ October 18-19 Occultation of Aldebaran