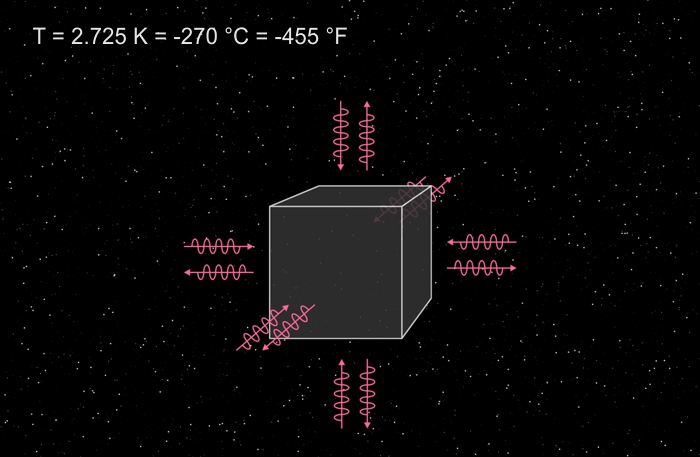 Question: How cold is it in outer space? — MF, Gotham City

Answer: That’s not as simple a question as you might imagine. Our normal definition of “temperature” is based on the collective behavior of molecules of gas or liquid in the environment. When you get the temperature online, from your smartphone, or from your outside thermometer, what’s being measured is the average kinetic energy of those air or liquid molecules. The equation for temperature in degrees kelvin (or simply kelvins) is:

The Kelvin scale is an absolute scale, with 0 K being the coldest temperature possible: 0 K is equivalent to a temperature of -273.15 °C or -459.67 °F. This temperature is referred to as absolute zero. It would be a state of matter in which all molecular motion has stopped. We could never cool something to that temperature because of quantum effects, but we can approach it. The coldest temperature achieved in the lab (to date) is 0.006 K.

Imagine a cube of metal painted flat black, and sealed inside a transparent chamber containing a vacuum. Take it outside and set it in the sunlight. The cube will absorb heat radiation (photons) and start to warm up. As it gets warmer it will emit more and more heat radiation. At some point, the rate of heat emission will equal the rate at which it is being absorbed, and the cube’s temperature will thereafter remain constant. It will have reached thermal equilibrium.

Any object in space will be exposed to a “sea” of photons streaming in all directions. These photons come from the combined light of all the stars in the universe, plus a residual left over from the Big Bang. This constant flux of photons is what’s called the cosmic background radiation (CBR). A black body will absorb incident photons, warm up to 2.725 K, and then radiate photons to maintain that equilibrium temperature. So that’s what is meant by the statement “The temperature of space is 2.725 K.”

Of course, if you’re near a star like the Sun, the side of the black body facing it will warm to a higher temperature. Astronauts who do space walks, and those who walked on the Moon, know this effect well. On the Moon, when in sunlight, temperatures can be as high as 200 °C (392 °F). In the shade of a mountain, temperatures drop to -200 °C (-328 °F). Those are the temperatures of the lunar regolith, which has a grayish-tan color and an albedo of 0.12 (it absorbs 88% of the incident light). So depending on the color of your space suit, you could be warmer or cooler.

Equipment built to function in space is typically shielded with a shiny reflective coating. This is done to prevent overheating from the Sun. In general, electronics function better when kept cool. That’s why space suits, and much of the ISS, are colored bright white. There’s a nice image of both here. The albedo of current NASA space suits is around 0.90, so they reflect 90% of the photons striking them and help prevent the astronaut from overheating.