On June 2 Saturn reached opposition, its closest approach to Earth, at a distance of 1.36 billion km (850 million miles). But it will remain in excellent position for viewing the entire month. It’s currently in the constellation Scorpius, just east of the reddish star Antares (the heart of the Scorpion). By contrast, Saturn appears “straw colored” and brighter. If you want a chart to help locate it, click on the thumbnail below. 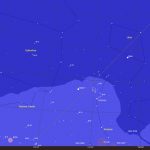 This shows Saturn’s location at sunset, but as the night progresses you’ll see it rising higher and providing a better view. By 11 pm it will reach its highest point 36° above the horizon and due south. Mars is just to the west of Saturn, still shining brightly and also a great telescopic target.

Saturn takes about 30 years to orbit the Sun. The tilt angle of its rings can be anywhere from 0° (edge-on) to ± 27° as seen from Earth. As you can see in the photo above, when the rings are edge-on (as they were in 2009) they pretty much disappear. The rings are only about 1 km thick. But this year the rings are near their maximum tilt, which makes for some spectacular telescopic views. Even with binoculars, you’ll be able to see the rings — a tripod mount to hold the binoculars steady will help a lot.

Saturn’s rings are composed primarily of ice particles, ranging in size from “dust” to a few hundred meters. They’re highly reflective and contribute to the overall visual brightness. Through a telescope, you will be able to see the shadow of the rings on the planet, the shadow of the planet on the rings, and the Cassini Division — a dark gap in the rings about the width of the Atlantic Ocean.

Astronomers believe the rings are the remains of an icy moon that got too close to Saturn and was torn apart by Saturn’s gravity. The particles that compose the rings are all in the moon’s original orbit, but have been spread around by mutual collisions and perturbations from Saturn’s other moons. The Cassini Division is caused by a resonance with Saturn’s moon Mimas. That moon orbits once in the time it would take a particle in the Cassini Division to orbit twice (a 2:1 resonance), so any particles in the gap experience repeated periodic tugs from the gravity of Mimas. This is what keeps the gap open.

The age of Saturn’s rings is debated. They could be as “young” as 100 million years, or they may have formed with Saturn, some 4.5 billion years ago. There’s a compelling argument for the rings being more recent — the general assumption is that over time, shiny ice will get covered with dust. Any Saturn’s rings are bright, with an albedo of 0.5 (they reflect 50% of the incident sunlight). But the jury is still out, as several mechanisms for “cleaning” the ice have been suggested.

So head outside tonite and take a look. If you don’t have binoculars or a telescope you can still enjoy this closely-spaced celestial trio of Saturn, Antares, and Mars. Using just the eyes, note the color differences in the three objects. Note how Antares twinkles and the two planets shine with a steadier light. Ponder that Saturn is bowing towards you — something that it does only once every 30 years. And consider that Antares (which competes with Saturn and Mars for brightness) is 620 light years distant — about 5,000,000 times farther than the planets.

Next Week in Sky Lights ⇒ The Temperature of Space

Q&A: The Formal Name of Our Moon
Q&A: The Temperature of Space
HOME