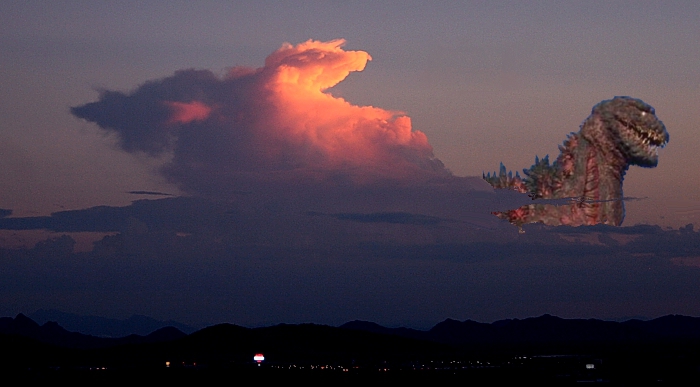 I present Cloudzilla. Another great example of pareidolia — the tendency of human perception to find familiar images (or sounds) when presented with what is actually “noise.” In the unlikely case that you’ve never heard of Godzilla, I’ve pasted a head shot into my photo for comparison.

When I’m taking my end-of-day break out on the deck, I almost always have my camera with me. I’m a big fan of cloud shapes and shoot tons of photos. I’ve done several posts of cloud formations that look like familiar objects. For example:

Pareidolia is an interesting phenomenon. Human brains seem to be hard-wired to recognize familiar shapes and sounds. We see or hear things that aren’t really there. When presented with “noise” (visual or acoustic) our brains kick into overdrive sifting through the random patterns and searching for something we recognize. The results are often compelling. Case in point: The “face” on Mars.

Acoustic pareidolia is not as common, but is well documented. Google “song played backwards” and you’ll get plenty of hits (some not suitable for minors). Perhaps the most documented example is the “psychoanalytic” technique of recording a conversation with a patient, then playing it backwards to listen for meaningful content. The patient often hears what they want to hear, so this is less a mainstream technique and more an acoustic Rorschach test.

The other senses (touch, taste, smell) seem less prone to pareidolia. That might be because of the large percentage of neurons devoted to vision and hearing. Or maybe it’s just that visual and acoustic information is more complex and permits multiple interpretations. But I’m done writing for today. Time to hit the deck and enjoy some clouds.