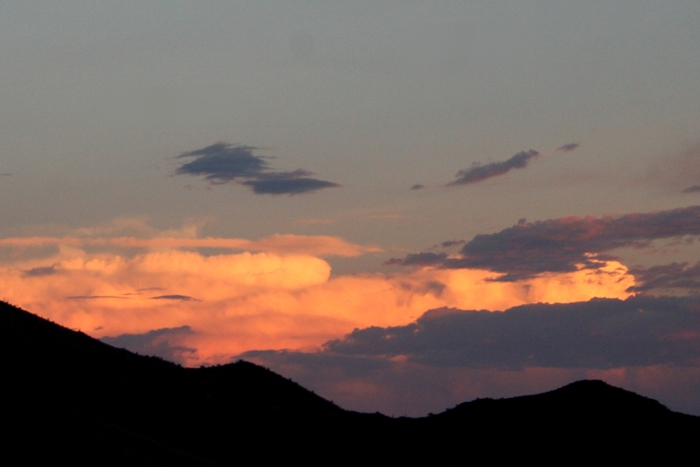 What’s wrong with this picture? The photo was taken shortly after sunset, so you’d expect some clouds to be in darkness. Others should still be illuminated. But the clouds still illuminated should be at a higher altitude, and the ones in darkness should be lower. The opposite seems to be happening here. What’s the explanation?

As the Sun sets in the west, the “shadow of the Earth” rises in the east climbing progressively higher into the sky. I did a short slideshow on that in my Jul 13, 2015 post. You can see how the lowest clouds are the first to go dark, followed by progressively higher clouds. The apparent contradiction in the photo above is a matter of perspective. It’s caused by the relative positions of my camera, the dark clouds, and the illuminated clouds. 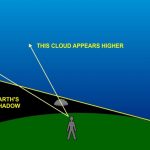 Your eyes provide a 2D projection of a 3D world. To interpret what you see in the sky, you often need to think in 3D. Astronomers need to allow for perspective when interpreting the cosmos. We tend to think of constellations like the Big Dipper (Ursa Major) as groups of stars plastered on a flat canvas. In reality, the stars composing that constellation are at distances ranging from 63–210 light years. From other perspectives out in deep space, it would not look like a “dipper.”

For example, as seen from Alpha Centauri, our Sun would appear as a star in the constellation Cassiopeia (sometimes called “The Big W”). Click on the thumbnail below to see a computer simulation of that view generated by Celestia, a free open source astronomy app. 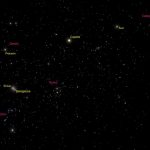 Celestia lets you view the night sky from anywhere in the cosmos. Depending on how far out you travel, the sky can look very different indeed. Readers familiar with the night sky will note that, in the thumbnail above, the star Sirius appears much closer to the constellation Orion than it does here on Earth. Alpha Centauri is 4.367 light years from Earth, and that’s a large change in perspective.

The technical term for this apparent shift in position is parallax. Hold up a finger at arm’s length, then view it with the left eye only and the right eye only. You’ll see your finger shift back and forth relative to the background. That’s parallax. One of the arguments against the Copernican proposal that Earth moves was the lack of parallax shift observed in the stars. Either the stars were incredibly far away, or Earth did not move.

Obviously, Earth moves. “Eppur si muove” as Galileo is said to have whispered after his trial. With his invention of the telescope, it eventually became possible to observe these tiny shifts — in the case of the nearest star (Alpha Centauri) that shift is a mere 0.77 arcseconds, about the diameter of a baseball seen from a distance of 60 km (38 miles).