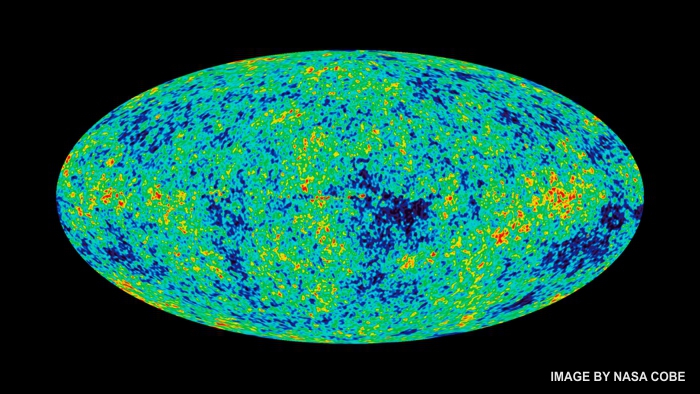 Question: My understanding is that radio telescopes can see farther than optical telescopes. That seems counter-intuitive since light travels much faster than sound. What am I missing here? — SS, New River, AZ

Answer: Both radio waves and light are electromagnetic in nature. Some man-made radio waves are encoded to carry information that can be converted into audio (like your favorite commercial radio stations or audio communication links). And some carry info that can be decoded into video. But they’re all still electromagnetic waves. The speed of sound has absolutely nothing to do with this.

It’s a common misconception though — that what you hear on radio is being transmitted as sound waves. However, sounds waves are compressional (aka “longitudinal”) and require a physical medium to propagate. Electromagnetic waves are transverse and require no medium … that’s why we can talk to astronauts on the ISS.

So the reason radio waves travel farther than light waves (in general) is because all the dust and gas out in space attenuates visible light, but is transparent to certain frequencies of radio waves. That’s how COBE could see nearly all the way back to the beginning of the Universe. The image at top shows what COBE saw. Click on it for a larger view.

That image is courtesy of NASA’s WMAP Science Team. It was reconstructed (with false colors) to show variations in temperature of the cosmic background radiation. Signals from within our own galaxy were digitally eliminated. The color variations represent temperature differences of a mere ± 200 micro-Kelvin (± 0.0544 °C or 0.0916 °F).

The thumbnail below shows what you can see in visible light vs. infrared. Infrared is an electromagnetic wave that’s just beyond the human eye’s visible range. Infrared is, in fact, a type of “radio” wave. The image is courtesy of Joao Alves at the European Southern Observatory (ESO) which operates three high-altitude telescopes on the Andes Mountains in Chili.

It shows a structure knows as Barnard 68, a Bok globule (molecular cloud) in the constellation Ophiuchus. What looks like a “hole” in the star field is actually the “shadow” of this cloud blocking the light from stars inside and beyond it. When you switch to infrared, many of those stars become visible. Click to enlarge. 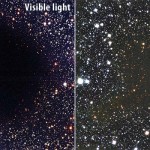 Radio waves longer than infrared penetrate even better. The infrared recorded in the thumbnail image spanned wavelengths from around 0.001-1 mm. For the COBE image at the top, the wavelengths were from 0.1-10 mm. Even longer wavelengths are available, but since this radiation is the same as “heat” radiation, the detectors must operate at temperatures near absolute zero (2-3 Kelvins). That’s around -270 °C or -455 °F.

Any warmer than that, and the detectors will record their own emissions. That would “overwrite” what they’re trying to see. So they need to be cooled using liquid helium. It’s an expensive and difficult process, and when the helium runs out the spacecraft loses its “vision.” Of course, ground-based radio telescopes don’t have that problem.

Next Week in Skylights ⇒ Sky Lore of the Hopi Tribe

Q&A: Why There Are Leap Years
Sky Lore of the Hopi Tribe

2 comments on “Q&A: Why Radio Telescopes can See Farther than Optical Telescopes”