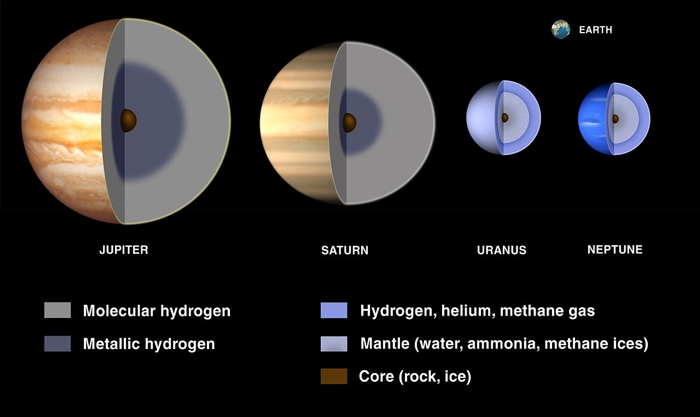 Question: It is well known that Jupiter, Saturn, Uranus, and Neptune are planets made of gas. When they first formed, they were very hot, but they must have cooled down by now. Doesn’t a gas change its state to a liquid or a solid as it cools? And if so, how can these planets remain in a gaseous state? — Swapnali, Earth

Answer: That’s an interesting question. Short answer: Gas giant planets like we have in our solar system formed 4.5 billion years ago. You’d think by now they would have cooled enough to change from a gaseous to a liquid (or solid) state. But they haven’t. The main reason is that they are made of primarily hydrogen and helium, which need to get VERY cold to condense. A few degrees above absolute zero in fact. And they’re not that cold yet by a long shot.

Further, the gas giants are heated by the Sun, and they all have residual radionuclides inside that release additional heat as they decay. For example, if you moved Jupiter to deep intergalactic space, it would continue to radiate internal heat for billions of years. Some of Earth’s geothermal energy comes from the same decaying radionuclides.

I got the above graphic courtesy of Wikipedia at this page. It shows the hypothesized internal structure of the gas giant planets of our solar system. They all likely have rocky cores, but the sizes are uncertain. The larger gas giants have sufficient pressure at great depths to compress hydrogen into a “solid” metallic state, but it’s hot hydrogen — 20,000 K by some estimates. Still, the extreme pressure holds it in a solid crystalline state. At lesser depths, hydrogen is in its usual diatomic gaseous form (H2), and helium in its monatomic form (He).

Although the diagrams don’t show it, there’s a good chance that some liquid (or solid) helium exists at depth. Solid helium has been created in the lab at -272.2 ºC using 40 atmospheres of pressure. But we’re not sure if it would solidify at the temperatures inside a gas giant. Jupiter, however, has up to 100 million atmospheres of pressure near its core. That might be enough to solidify helium, but its triple point diagram is uncertain in that extreme range of temperature and pressure.

There’s also a fair amount of methane (CH4) in the gas giants. It would otherwise condense into a liquid at -161.5 °C (-258.7 °F), and there could well be a layer of liquid (or solid) methane at some depth. NASA has recently confirmed the presence of liquid methane on Saturn’s moon Titan. But in the upper atmospheric layers of a gas giant, the methane is kept well mixed with the other gaseous components.

At some time in the distant future, the gas giants will cool down to the average temperature of space at their distance from the future (dimmer) Sun. Their internal structure will change, and a lot more gas will condense into a liquid or solid state. But for the foreseeable future, they’ll continue more or less as is.

Next Week in Skylights ⇒ The September 2015 Lunar Eclipse