A perpendicular moonrise can only be seen from the tropics, and only then near an Equinox. At other locations on Earth, the Moon rises at an angle to the horizon prolonging the event. In fact, near the north and south poles the Moon can skim along the horizon grazing the distant landscape for hours. The Midnight Sun is a result of that same geometry.

There’s some speed variation, based on where the Moon is located on its elliptical orbit, but 14.5°/hour is close enough for this post. The Moon’s speed is what determines how long a moonrise (or moonset) lasts. Watching a moonrise can be a Zen-like experience, as the first bright edge of the lunar disk breaks the horizon and distant objects are silhouetted against the rising Moon. Once the Moon has fully risen, not much more changes.

If it’s not already apparent, I should define that “moonrise” begins when the first sliver of the Moon’s disk appears above the horizon, and it ends when that disk is completely above the horizon.

So here in Arizona, our typical moonrise is at an angle of anywhere from 45-75° to the horizon. That extends the length of moonrise to around 4-5 minutes. But I recently caught one on Feb 3, 2015 that lasted a full 11 minutes. How that happened is an interesting story, and the subject of the time-lapse animation above.

My digital planetarium, Cartes du Ciel (CDC), had alerted me to a fortuitous photo op. The app allows me to enter data describing the geometry of my local horizon (azimuth vs. elevation). There’s a large mountain named Gavilan Peak just east of my home. It can delay the rise time of celestial objects by up to an hour. The thumbnail below shows that mountain rendered against the sky on Feb 3, 2015. This was a digital prediction calculated several weeks before the event, but I could see there was a good chance of the moonrise grazing the north slope of the mountain. 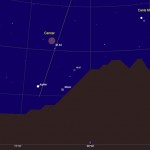 Gavilan Peak is only about 500 meters (0.4 mile) away, so walking around the yard provides me a parallax shift to fine-tune the view. I set up my camera and tripod at my “best guess” location. What followed was an impromptu astrophotography session. 24 frames were selected for the time-lapse animation. But here a few notes are in order:

When I look at the EXIF time stamps on the images, I see this moonrise lasted an amazing 11 minutes. If it weren’t for Gavilan Peak, I’d have to move to more northerly latitudes to enjoy such extended events. In the meantime, I’ll keep checking CDC around the dates of a Full Moon. Hopefully, I’ll get better exposures and framing next time.

Next Week in Skylights ⇒ Why Jupiter Doesn’t Condense