Question: After reading your post about the Perseid Meteor Shower last week, I couldn’t help but wonder if these things present any danger to the International Space Station. Has the ISS ever been hit by a meteor? — JR, Oceanside, CA

Answer: The short answer is yes. The ISS has been hit many times, but never been damaged to the point of any real danger to the crew. It’s a large “target” as you can see from the above graphic — about the size of a regulation football field, so it gets hit quite often. Fortunately, all those hits have been from relatively small pieces of debris.

I discussed a related question in my June 16, 2014 post: Meteor Showers and the ISS, but will go into more detail here.

Interestingly, the hazard is not just meteors. There’s also thousands of fragments of “space junk” left over from rocket launches, satellites that have collided, and even tools “dropped” by space-walking astronauts. To get a feel for just how much debris is out there, check out the real-time display at Stuff in Space. That page will take awhile to load — it’s plotting the positions of close to 500,000 known objects.

So yes, the ISS has been hit, but has so far dodged any potentially fatal large debris. The thumbnails below show some of the more “minor” impact damage. Left to right: ding in the cupola view-port window, tear in the solar panel array, dislodged reflector in the heat radiator boom. Click to enlarge. 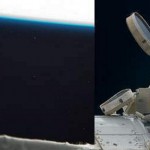 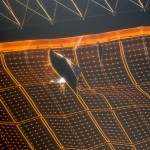 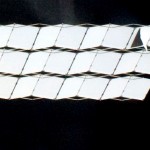 When you’re that large a target, and there’s that much debris in orbit, maintenance and repair is an ongoing job, totally separate from the science, but equally essential. Glass, solar panels, and radiators are relatively fragile materials, but the solid hull of the ISS is made from multiple layers of Kevlar, ceramics, and other advanced materials, with a total thickness of 10 cm (4″). The windows contain 4 layers of high-strength glass ranging from 0.6 to 1.2 cm (¼” to ½”). This allows the ISS to withstand impacts from objects up to about 1 mm (0.04″). But the hull could be breeched. Take a look at the thumbnail below, provided by the European Space Agency (ESA), showing the result of a hypervelocity impact simulated in the lab. The average speed of debris that hits the ISS is around 10 km/s (22,400 mph). 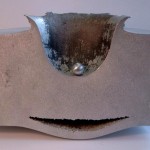 It should be noted that, in the thumbnail above, the impacting object (a 1 cm steel sphere) was totally vaporized at impact. A new one was placed in the impact “crater” to provide a sense of scale. You can see how the aluminum plate target literally splashed like a liquid when the projectile struck. And this was at a speed of only 5 km/s.

Bottom line: The ISS will be hit by a hull-breeching impactor at some point. It’s a matter of when, not if. Fortunately, there are emergency protocols are in place to protect the crew, and evacuate them if necessary. The ISS maintains a docked Soyuz capsule to use as an escape vehicle for return to Earth. The bad news is that a Soyuz can only evacuate 3 crew members. The good news is that there’s often more than one Soyuz attached, as they are also used for regular delivery of needed supplies, equipment, food, and fuel.

Next Week in Sky Lights ⇒ Earth’s Other Moons

2 comments on “Q&A: What Happens When a Meteor Hits the ISS”