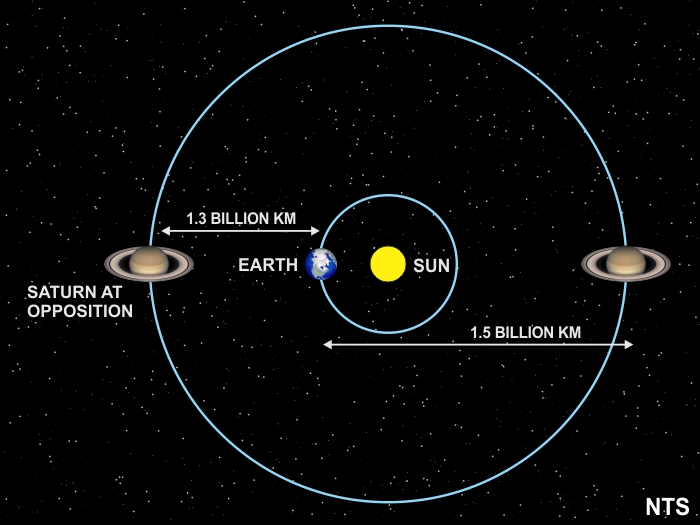 The ringed planet Saturn reaches opposition on May 22, but will provide a spectacular show for several weeks before and after that date. Saturn is now near its closest approach to Earth, so it appears larger and brighter than usual. Saturn’s disc subtends 18.5″ (arc-seconds) and the rings subtend 42″. The graphic shows what opposition means — both planets are on the same side of the Sun in their orbits, and as close as they can get. Note: The diagram is not to scale (NTS).

You shouldn’t have any trouble finding Saturn. It will be the brightest object in the southeastern sky 2 hours after sunset. Look for it in the prominent constellation Scorpius, near elevation 27°, azimuth 140°, just above the red giant star Antares (the “heart” of the scorpion). Antares will be glowing at magnitude +1.0, but Saturn currently outshines it with a magnitude of +0.8. If you still need a chart to help you find it, just click on the thumbnail below. 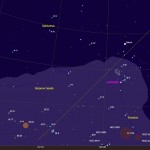 Saturn’s magnificent ring system is now near its maximum tilt of 27°. This happens every 15 years, but not necessarily at opposition. On May 22 the tilt will be 24°. Because the rings reflect sunlight (as does the planet) Saturn will appear brighter than usual. When the rings are edge-on, as they were in 2009, you can barely see them and Saturn’s overall brightness will be less than usual.

If you use binoculars, I highly recommend using a tripod to steady your view. If you use a telescope, a magnification of 150-200X should work well. Saturn will cross the sky at a relatively low elevation this year, so Earth’s atmosphere will cause some blurring. At culmination (its highest point in the sky, when it’s due south around midnight) Saturn will have an elevation of only 38° above the horizon.

Here’s some of the details you should look for. The first thumbnail shows how Saturn appears to the Hubble Space Telescope (HST), and the features to look for are labeled. The second thumbnail shows what you’d see in an average amateur telescope. But if you’re using binoculars it’ll look 10-20 times smaller depending on the binocular’s magnification. Most common binocular models range from 8X to 20X. 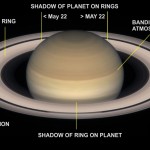 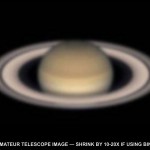 There’s one more thing to look for, either in binoculars or a telescope. Saturn has some 62 (at last count) moons orbiting it. The brightest 4 or 5 should be easy to spot, especially through a telescope. With binoculars, you’ll definitely see Titan and maybe Rhea. In order of brightness, those moons are: Titan, Rhea, Tethys, Dione, and Enceladus. They change positions continuously, but click on the thumbnail below to see their positions relative to the planet on May 22. 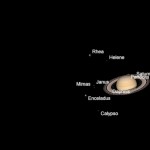 That image was simulated in Cartes du Ciel. It shows the brightest 13 moons. Except for the brightest 5, all the moons appear as single pixels. I’ve seen the brightest 4 using my 5″ Takahashi refractor, but the others have eluded me. If you don’t have Cartes du Ciel (and you should, since it’s free), there’s online tools that will tell you where the moons are on any given date. Here’s one I like that shows only the brightest 5 moons: http://www.wwu.edu/skywise/saturn.html.

You might wonder how to tell if a specific point of light is really one of the moons, or just a star that happens to be in the same field of view. Only the most powerful telescopes will show the moons as more than a “point.” And the moons’ motion around the planet is too slow to be much of a clue. The only way to be sure is to check again the following night.

Saturn itself moves with respect to the stars. It makes one 360° orbit in 29.45 years. That works out to an average speed of 0.033°/day — several times its apparent diameter.  But since we’re observing Saturn from the moving Earth, its apparent speed will vary. Near opposition its motion becomes highly irregular. As with all the outer planets, this is when it executes the complex dance called retrograde motion.

Of course, wherever Saturn goes, its moons will follow it across the sky. Any stars that happen to be in the field of view will be left behind. However, the moons continuously change position with respect to the planet. So it really requires multiple observations for a positive ID on moons. That was exactly the process used by Galileo in 1610, when he discovered the four largest moons of Jupiter.