There will be a total eclipse of the Moon this Saturday, April 4. It is the third of an eclipse tetrad, with the fourth and final eclipse coming on September 28 later this year. As with all eclipses, whether you’ll be able to see it depends on where you are located on Earth. See the map below for details, and click on it to enlarge. The image sequence above is a lunar eclipse I photographed back on April 14/15, 2014. That eclipse was the first of the ongoing tetrad. You’ll see approximately the same sequence in any total lunar eclipse, but the times will be different.

Lunar eclipses occur when the Sun, Earth, and Moon are collinear, and the Moon passes through Earth’s shadow, which extend into space about 1.4 million km (870,000 miles) — roughly 4 times the distance to the Moon. When that happens, the Moon goes from Full (left-most image above) to a dark orange or brick-red color (right-most image). You can see why this phenomenon is sometimes called a “Blood Moon.”

Of the dozens of lunar eclipses I’ve seen, that eclipse in my photo was probably the deepest red. Every eclipse is different, and the color depends on the ring of atmosphere around the Earth as seen from the moon. Click on the thumbnail below to see a NASA simulation of that view. Remember, the Sun is behind the Earth. 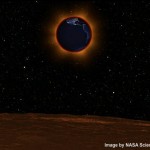 So if that ring of atmosphere contains a lot of clouds (which block sunlight), then we get a very dark eclipse. If the ring is clear air, we get the combined light from some 40,000 km (25,000 miles) of sunsets around Earth’s circumference. That can make the eclipsed Moon appear very red. Since this basically comes down to a weather forecast, any predictions of eclipse color are approximate at best.

This will be a very short eclipse, with totality lasting only a few minutes. It will be the shortest lunar eclipse in this century. The best view will be from the Americas, but you’ll have to get up early to see the setting eclipsed Moon. Click on the visibility chart below to see a slightly enlarged version.

The symbols marking eclipse boundaries represent different phases of the eclipse. The times in UTC are:

Some people believe that this tetrad has special significance because the eclipses coincide with important Jewish festivals. The two April lunar eclipses in 2014 and 2015 occur at the same time as Passover, while the October and September eclipses occur during the Feast of Tabernacle. This, they suggest, is connected to a biblical prophecy of the end of times. In fact, eight of the tetrads since the first century have coincided with Jewish holidays without the world going under, so there is no reason to believe that the 2014-2015 tetrad will end the world this time either. No worries. Get out there and enjoy this lunar eclipse.

The Brightest Trio in the Sky
Q&A: Wisconsin Aurora
HOME