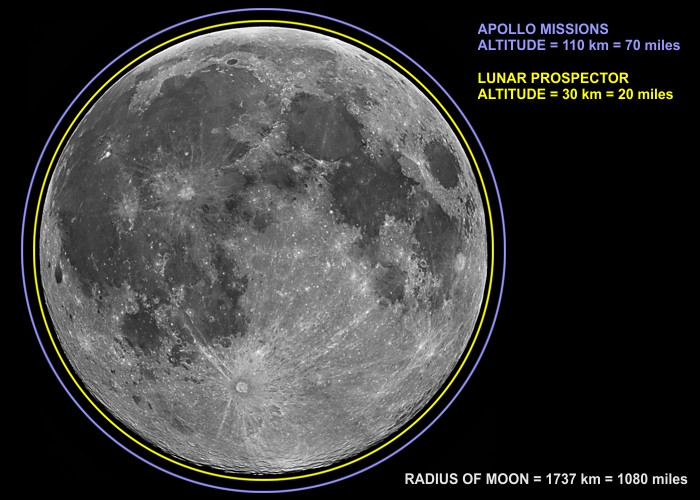 Question: I read that the ISS orbits Earth at an altitude of around 250 miles so that it won’t be affected as much by air drag from the atmosphere. That got me thinking, since the Moon has no atmosphere, would it not be possible to orbit the Moon just a few meters off the surface? — GK, Munich, Germany

Answer: Theoretically, yes. But there’s a few problems. First, just for scale, take a look at the graphic. It shows the typical Apollo mission orbit in blue, and the Lunar Prospector orbit (the lowest stable orbit attained to date) in yellow. Both orbits are shown to the correct scale relative to the size of the Moon.

Lunar Prospector was launched back in 1998. It made some 7000 lunar orbits over a period of 6 months, mapping mineral and ice deposits on the lunar surface. It was intentionally crashed into a crater near the Moon’s south pole on July 31, 1999 in the hopes that ejecta from the crash would reveal the presence of water ice. And it did indeed discover ice, as spectroscopic analysis of the ejecta plume later confirmed.

Prospector was a successful mission, but here’s the problems with very low orbits:

Those first two bullets should be easy to understand. Obviously, you don’t want to orbit the Moon so low that you run into a mountain. And Prospector was in a polar orbit, meaning it would eventually pass over every point on the Moon. The Apollo mission orbits were more or less equatorial, which required less energy for the launch, and they carried astronauts. At their typical altitude of 110 km, that left a comfortable safety margin.

The third bullet requires some explanation. The term mascon is an abbreviation for “mass concentration.” Mass is what makes gravity and, compared to Earth, the Moon’s gravity is “lumpy” because of the Moon’s far different geological history. There are huge concentrations of mass below the lunar surface in many locations. Check out this map provided by JPL.

If you were standing near the edge of one of these mascons, gravity would be skewed and a plumb bob would hang almost a third of a degree off from vertical, pointing toward the mascon. That may not seem like much, but for precise spacecraft orbits, these variations in lunar gravity cause low orbits to gradually change shape and become unstable.

And there are additional destabilizing effects:  Gravity from Earth, Sun, and Jupiter, dust in orbit around the Moon, the solar wind, and the pressure from sunlight. No orbit will last forever given all these perturbations, so Prospector did well to last as long as it did. Any orbit less than 30 km altitude would be a compromise between mission lifetime and surface details resolvable. And as instruments get better, lower orbits become less necessary.

Interestingly, I once calculated that a high speed artillery shell fired at a shallow angle from the lunar surface could just barely orbit the Moon. Rifle bullets wouldn’t quite do it. The minimum speed needed to orbit the Moon near the surface is about 1.7 km/s. This is just within reach of the fastest artillery shells. But if anyone ever tries this experiment, be ready to duck and cover about 1.8 hours later when the shell returns from behind you. That is, of course, unless it hits a mountain (or gets pulled off course by a mascon) along the way.

Next Week in Sky Lights ⇒ The Brightest Trio in the Sky

Corkscrew Contrail
The Brightest Trio in the Sky
HOME