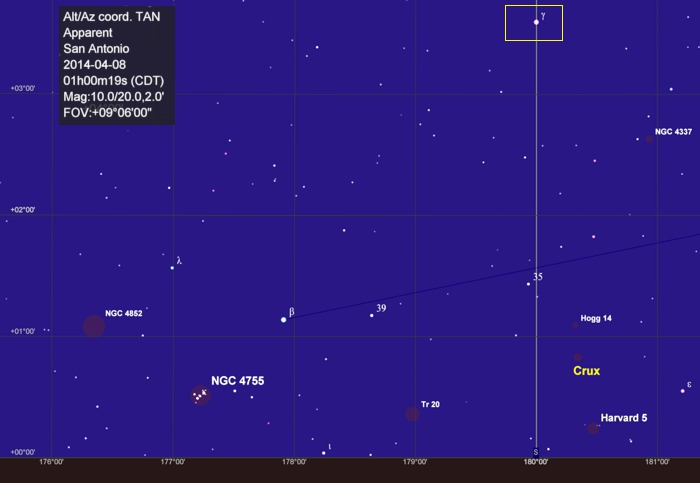 Question: Now that I’ve moved from Phoenix to San Antonio I can see a little farther south in the sky. I recall an article you wrote about the near-impossibility of seeing the Southern Cross from Phoenix, and wondered if I was now far enough south to see it?  — Richard Searles, San Antonio, TX

Answer: Nice to hear from you Richard. [We were in the same astronomy club back in the 80s-90s.] A copy of that old article has been emailed to you. For other readers interested in seeing it, click here (106k PDF). It was written when I was using a much less powerful computer, so please excuse the crude graphics.

Normally, the best view of the Southern Cross is from the southern hemisphere. But from southern parts of the northern hemisphere, part or all of this famous constellation can be seen. This somewhat lengthy post is your “how to” guide. It will demonstrate how to find, from any location, just how far south you can see on the celestial sphere — the globe of stars surrounding us in space.

I have an easy formula for calculating that. It’s based on high school geometry. From San Antonio, at latitude 29° 25′ N (about 4° farther south than Phoenix), you can theoretically see as far south as declination δ = -60.6°. The formula is simply: δ = latitude – 90°. Click on the thumbnail below for details. 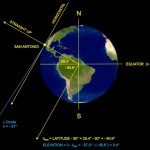 The Southern Cross is officially known as the constellation Crux (Latin for “cross” — rhymes with “flux”). The northernmost star in that bright constellation is γ Crucis, a red giant. Its distance is 88.6 light years, and its apparent magnitude is +1.63, making it the 25th brightest star in the sky.

The γ (gamma) tells us it’s the 3rd brightest star in that constellation, after α (alpha) and β (beta) Crucis. The genitive form of “Crux” is “Crucis” and that’s how astronomers label most bright stars.

The declination of γ Crucis is δ = -57°, and based on the geometry in the thumbnail, its maximum elevation above your horizon in San Antonio will be 3.4°. That’s still pretty low, so to see γ Crucis, you’ll need to optimize several factors:

Do all that, and you will have established the optimum geometry for observing γ Crucis. But even then, there’s the vagaries of weather, so pray for clear sky down to your southern horizon.

And that brings me to HOW we tell when an object of interest is at culmination. In the past, we had to compute the culmination numbers by hand, using the formulae provided in such classics as Practical Astronomy With Your Calculator (and later for spreadsheet). If you really want to do these laborious calculations, you can also find the formulae online at websites like this. But there’s a much easier (and entertaining) way to get the same answers.

Download any of the free apps that bill themselves as a virtual planetarium. I especially like Sky Chart. It’s designed for use on a desktop with a large screen, but will run on laptops and some tablets. Been using it for about 6 months and really like the UI and settings options. The help files are pretty good too. From this point on, I’ll assume you have your preferred app and know how to use it. I’ll keep the instructions generic.

The graphic at top shows γ Crucis at the instant of culmination as seen from San Antonio on April 8, 2014 at 01:00 am. It’s a screen capture of what Sky Chart displayed. Here’s how I got there …

This is only one example of how you could use a virtual planetarium. Their potential is virtually unlimited (pun intended). You could, for example: See what the sky looked like on the day you were born, or identify that bright object next to the Moon, or watch how the sky changes in 1 century increments, or see what Mars actually does when it goes into retrograde motion, or predict the next time the Moon will occult Jupiter as seen from the South Pole.

On a portable tablet, these apps are also a great way to just learn your way around the sky, seeing the names of stars, planets, and constellations displayed onscreen. Using GPS and inertial sensors, the app will show onscreen whatever you have the tablet pointed at.

The most southerly object I’ve seen from Phoenix is Canopus (δ = -52° 42′). I had to compute its culmination numbers the long way, using a scientific calculator. Never again. These days I let my computer do all the number crunching. Leaves a lot more time for actual observing.

Next Week in Sky Lights ⇒ 2014 Conjunction of Mars and Antares