Question: I know we’ve been to the Moon, but how do we know exactly how far away it is? I mean, it’s not like you can use a standard odometer in space. Or is it done with GPS or radar or what? — JV, Nantes, France

Answer: An excellent question. The methods for measuring that distance have greatly improved since the first estimates were made. The first attempt was by Hipparchus, around 200 BCE, using the geometric method of parallax. He calculated a distance within 6.8% of the correct value: 384,400 km (238,855 miles).

When Sir Isaac Newton developed his theory of gravity back in the late 17th century, it became possible to calculate the distance to the Moon based on the mass of the Earth and the Moon’s orbital period. That formula is:

The mass of the Earth could be calculated using that same theory (but a different equation), and the Moon’s orbital period was known from direct observation. The universal gravitational constant, however, was not accurately measured until 1798, nearly 71 years after Newton’s death. That measurement was first done by Henry Cavendish, and later refined by others, a process that continues to this day. It’s a notoriously difficult number to measure.

But the distance became directly measurable when radar was invented in the early 20th century. It was now possible to bounce a radar pulse off the Moon, measure the pulse’s travel time, and calculate the distance using a simple formula from kinematics: d = v × t. Since radar travels at the speed of light (v = 299,792,458 m/s), a pulse sent from Earth will return in about t = 2.5 seconds. Multiply those two numbers, divide by 2, and you have the distance to the Moon.

The situation further improved in the 1960s, when astronauts in the Apollo space program left retro-reflectors on the lunar surface. Click on the thumbnail below to see one of them. 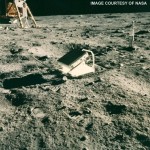 A retro-reflector is basically a bunch of mirrors arranged such that, regardless of the angle light strikes it, it reflects that light straight back to the source. If you want to learn more about how they work, see this link. By the time these devices were deployed, scientists also had lasers powerful enough for detectors to “see” the returning pulse of light, and atomic clocks to measure the time with very high accuracy. It is currently possible to measure the distance to the Moon with a precision of about one millimeter (about 1/25 of an inch).

My animation simulates, to correct scale, a 1.0 second laser pulse fired from Earth and reflecting back from the Moon in approximately real time. It also shows something many people find surprising: When you fire a laser (or any beam of light) for one second, and then turn it off, that 299,792,458 meter long beam continues to travel independent of its source.

Scientists are still using these retro-reflectors to monitor the distance to the Moon. They’ve found that the Moon is slowly spiraling away from the Earth by about 3.8 cm each year. The reason for that is beyond the scope of this post, but it has to do with gravitational interactions. Theory suggests that, when the Moon and Earth reach the point where the length of a day (which is also slowly increasing) equals the orbital period of the Moon, the system will reach equilibrium. That won’t happen until around 50 billion years from now, so barring some cosmic catastrophe, we’ll continue enjoying the sight of our nearest neighbor in space for the foreseeable future, albeit at greater and greater distances.

Next Week in Sky Lights ⇒ Saturn at Opposition on May 10

GMT vs. UTC
Saturn at Opposition on May 10
HOME