Observers in most of North America and South America will be treated to a total lunar eclipse starting late tonight, and continuing into the early morning hours of tomorrow. A Full Moon will rise in the east around sunset, but the actual eclipse won’t happen until the Moon is near its highest point in the sky around midnight.

Observers in other locations may be able to catch parts of this event. For a global map of the details, see this page from NASA’s website.

Because this event can be seen from so many parts of the world, it’s simpler to give the times in UT. If your computer clock is set correctly, just use my Local Time & UT page to convert to local time. Here’s the eclipse timing sequence:

As you can see, the various parts of this event are spread out over several hours. After mid-eclipse, the dimming sequence reverses. The show will be over at 10:39 UT. No telescope is needed, but if you have binoculars you should use them. They will significantly enhance your visual experience.

The animation simulates what will happen. Your view is from above the North Pole. Earth is kept motionless for simplicity, and only the Moon is shown moving. The Sun is off to the right, so Earth’s shadow is cast to the left. Only the darkest part of Earth’s shadow, the umbra, is simulated. Watch what happens when the Moon enters that shadow.

I should note that the Earth-to-Moon distance in the animation is not to scale, though the Earth and Moon sizes are. Further, the animation is running about 85,000 times faster than real time. Note also how, as the Moon orbits Earth, it keeps the same side facing Earth at all times.

The reason eclipses don’t happen every month is because the Moon’s orbit around Earth is tilted by 5.145° to the plane of Earth’s orbit. So what usually happens is the Moon passes “above” or “below” Earth’s shadow instead of through it.

As this event unfolds, you’ll observe the Moon go from its bright Full phase, illuminated by the Sun, into near darkness. The Moon never goes totally black, as sunlight gets scattered into the shadow by Earth’s atmosphere. More often than not, this gives the eclipsed Moon a ruddy orange color. It’s sometimes described as “brick red.” Click on the thumbnail below to see a photo I got of the August 28, 2007 total lunar eclipse. 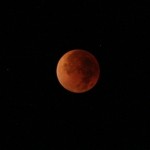 If you were on the Moon during totality, you would observe the Sun eclipsed by the Earth. But all around the Earth’s circumference, in its atmosphere, you’d see a “ring” of sunsets and sunrises that produce this unusual Moon coloration. How dark the Moon actually gets is dependent on the cloud cover around this “ring,” and is difficult to predict.

North and South American observers will need to stay up late to catch this eclipse, but if you’ve never seen one before it’s well worth the effort. If you miss it or get clouded over, you can always try again on October 8, 2014, when we’ll enjoy a repeat performance of this natural wonder.

If your local weather doesn’t cooperate, you can watch it streamed live from several NASA media outlets.