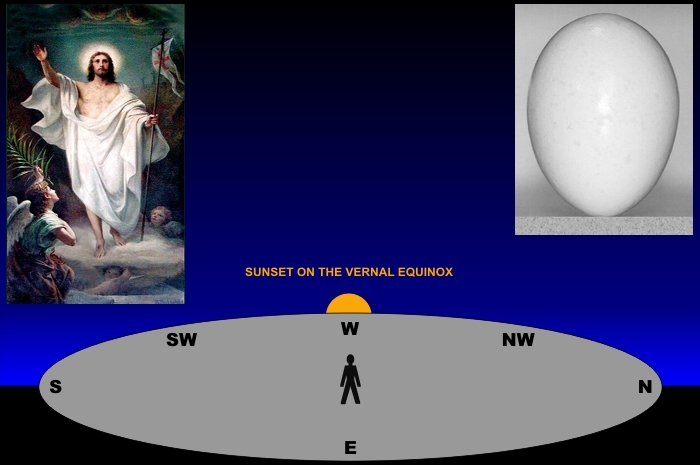 The Vernal (Spring) Equinox is on Thursday, March 20, 2014 at 16:57 UT. It happens at a specific time on that date, at the point where the Earth’s rotational axis is pointed 90° away from the Sun, and the Sun is exactly over Earth’s Equator. Same thing happens in September, at the Autumnal Equinox. Click on the thumbnail below for more details. 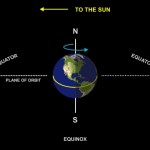 Every year around this time I get questions about the Equinox. Those questions generally fall into 3 categories:

The first question is about astronomy, and it’s easy to answer. Earth’s rotational axis remain fixed in space, tilted at 23.5° relative to its orbit as it circles the Sun. It’s like what a spinning gyroscope does when you move it around. So that means there must be two times each year when Earth’s rotational axis is pointed exactly 90° away from the Sun — those two points are the Equinoxes.

On an Equinox, there are 12 hours of day and 12 hours of night (approximately). The thumbnail above pretty much sums it up, but if you want more astronomical details, see my September 19 2011 post, or my March 19, 2012 post.

The second question is about history. Easter is an important religious holiday in Christianity. It celebrates the Resurrection of Christ. The date on which Easter is celebrated can be anywhere from March 22 to April 25. This wide range is a result of how the date is calculated. According to religious tradition, Easter is celebrated on the first Sunday after the first Full Moon after the Vernal Equinox. It’s actually a bit more complicated, but that’s close enough for our purposes.

In many early societies, the Vernal Equinox was considered the start of the year, the birth of a new cycle of seasons, and a harbinger of life and growth. Christian hierarchy wanted to keep the celebration of Easter correlated with the Jewish Passover, so that’s how the “first Sunday” rule came to be. The exact calendar date of the Resurrection is not known.

Then there’s the connection between eggs and Easter, and it has nothing to do with the Easter Bunny myth. Quite simply, eggs have long been a symbol for rebirth and fertility. The tradition of decorating eggs predates Christianity. Archeologists have discovered ostrich eggs more than 2000 years old decorated with engravings. Early Christians from Mesopotamia stained eggs red to symbolize the blood of Christ. The Christian Church officially adopted the custom in 1610, recognizing eggs as a symbol for the Resurrection. Pope Paul V proclaimed this prayer:

Bless, O Lord! we beseech thee, this thy creature of eggs, that it may become a wholesome sustenance to thy faithful servants, eating it in thankfulness to thee on account of the resurrection of the Lord.

The final question is the easiest. FACT: It is no easier to balance an egg on the Equinox than it is on any other day. Period. The idea of balancing an egg on the Equinox is a long-standing urban myth. I’ve done considerable research on this topic, but have no idea when it got started.  I do have an idea how this myth got started, and I discussed that in my March 19 post.

So enjoy your Vernal Equinox, watch the Sun set exactly to the west, and leave the eggs in the fridge.

Next Week in Sky Lights ⇒ Catching a Ball on the Moon

Q&A: Throwing a Ball to the Moon
Q&A: Catching a Ball on the Moon
HOME