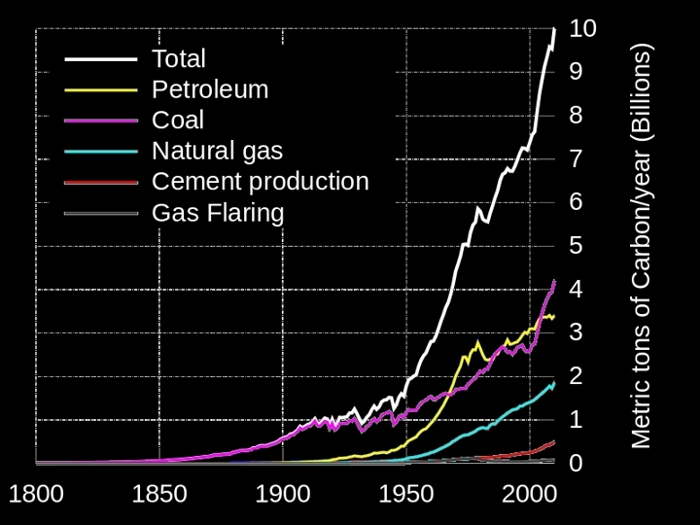 Question: Are human activities causing climate change, or is it being caused by natural phenomena?

Answer: The graph above begins about the same time as the Industrial Revolution, when we first started burning fossil fuels in large amounts. These fuels (oil, natural gas, coal), and other processes, release CO2 into the atmosphere. CO2 is a greenhouse gas that traps heat in Earth’s atmosphere. So is global warming anthropogenic (caused by us)? Or is it a result of some natural cycle outside our control? There is room for some debate here, even among climatologists. But the scientific consensus is that, over the last 131 years, what we’re seeing is an anthropogenic effect.

The thumbnail below shows the results of ice core and direct atmospheric sampling. Click to enlarge. 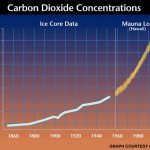 The gray line in that graph is data from ice cores. The finer yellow line is more precise data from direct atmospheric sampling at Mauna Loa, Hawaii, ongoing since 1958. The two segments “connect” nicely, showing the two measurement methods are well calibrated. And CO2 is only one of several compounds, collectively called greenhouse gases, that can cause global warming. For the physics behind the greenhouse effect, see my July 9, 2012 post.

Take a look at the amazing correlation shown on this graph. It reports the results of an ice core analysis from Antarctica dating back over 400,000 years. The amount of CO2 is measured directly from tiny bubbles of air trapped inside the ice. The temperature is inferred from the isotopic ratios of 18O to 16O. To see how this is done, go here.

Of course, the variations in CO2 shown in that graph predate our large-scale burning of fossil fuels. It verifies there are natural events that can cause CO2 levels to rise and fall. Proposed triggers include cyclic changes in Earth’s orbit, tilt, and the heat output of the Sun. Changes in ocean currents and chemistry could also have an effect. And any event that puts a lot of dust, gas, and clouds into the atmosphere (volcanic eruptions, asteroid impacts, large conflagrations, increased water evaporation) can block enough sunlight to shut down the photosynthesis that recycles CO2. But as far as we can tell, none of those natural events are occurring now.

The aptly named 350.org claims that the safe level of CO2 in the atmosphere is 350 parts per million (ppm). We passed that level way back in 1990. Many climate scientists predict that, beyond the 350 ppm level, irreversible effects are likely. One example is the decrease in Earth’s albedo (reflectivity): Ice is highly reflective. As sea ice and glaciers melt, Earth reflects less sunlight back into space, the planet heats up further, and so even more ice melts. It’s what’s called a positive feedback loop. Other climate-related examples exist, but this one is the easiest to understand.

Interestingly, global commerce is already reacting to climate change. Companies that ship between Europe and East Asia are increasingly using the Northwest Passage, recently opened by melting Arctic sea ice. The next best route (via the Panama Canal) is about 10,000 km (7000 miles) longer, requires expensive toll payments, and has a limit on the size of ships that will fit in the locks.

So in conclusion, I have to concur with the majority of scientists. Anthropogenic global warming is real. There are those who will disagree. Either way, it would be wise to err on the side of caution and take action to reduce our CO2 emissions. Once started, a positive feedback loop could prove impossible to reverse.

There’s a final Question many readers are probably asking themselves: Can anything be done to reverse climate change? Answer: Yes. The easy solution is act locally. The difficult, expensive, and risky solution is geoengineering. However, even if both solutions were initiated worldwide tomorrow, how long it would take the climate to return to normal is an unknown. Estimates range from decades to centuries, and are highly uncertain.

Next Week in Sky Lights ⇒ Venus at Greatest Elongation

Part 2: The Difference Between Weather and Climate
Venus at Greatest Elongation
HOME