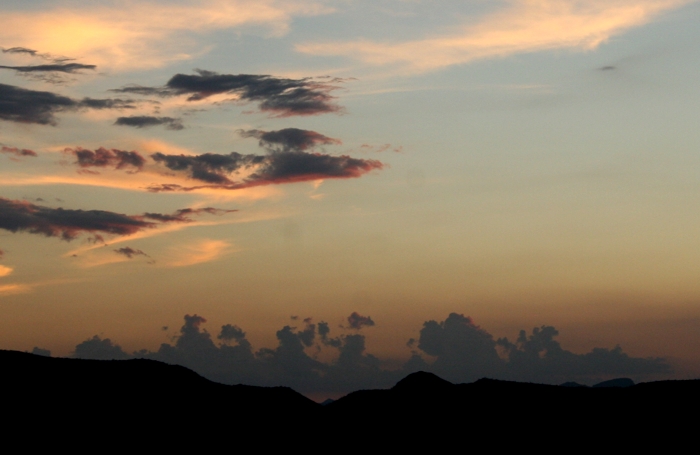 All cloud formation has one process in common: Warm, humid air rises in the atmosphere and cools by expansion in the lower pressures aloft. When its temperature reaches the dew point, invisible water vapor condenses into tiny droplets of liquid water that we see as clouds. But there’s a few different mechanisms that can cause humid air to rise.

This week’s photo shows one of those mechanisms, convection, occurring over Lake Pleasant. The lake lies just beyond that mountain range on the horizon. The time is shortly after sunset in early September, when the air temperature drops rapidly at night. Water in the lake retains its heat, so evaporation continues even after sunset. That warm air rises, like a hot air balloon, and experiences adiabatic cooling.

When rising humid air reaches the altitude at which the temperature equals the dew point, clouds happen. This is usually a fairly constant altitude over large flat geographic areas. In that scenario, we often observe clouds with a definite “bottom” corresponding to the condensation altitude. Click on the thumbnail below to see an example. 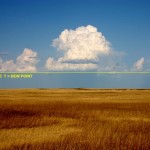 If you look closely at the main photo at the top, you’ll see that altitude layer just barely visible through the lowest valley of the mountain range. It’s probably only about 500 feet over the lake. The altitude at which air temperature equals the dew point can be anywhere from zero (in which case you have fog) to thousands of meters.

Another method by which humid air reaches higher altitudes is called orographic lifting. This happens when a humid air mass driven by prevailing winds is forced to move up over terrain of increasing height. Again, the air cools adiabatically to the dew point and forms a cloud. The thumbnail below shows an example. 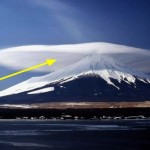 That second thumbnail shows Mt. Fuji in Japan, where prevailing west winds over the Sea of Japan deliver air carrying a lot of humidity. The altitude where air temperature reaches the dew point is obvious, and in this example created a stunning “mushroom cap” cloud known formally as a lenticular cloud.

A third way for air to get pushed upward is called convergence, when two moving air masses collide and the only way to go is up. This can spawn violent storms, and often generates tornadoes. Check out the thumbnail below. 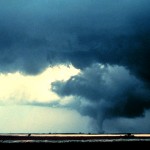 Where convective, orographic, or convergent effects are strong, the source of a cloud is usually obvious. But those random clouds you often see floating around the sky were formed by the same processes. Once formed, depending on upper-atmosphere winds, clouds can be transported hundred of kilometers from their point of origin.

Next Week in Sky Lights ⇒ Part 1: The Difference Between Weather and Climate

The International Dateline Explained
Part 1: The Difference Between Weather and Climate
HOME