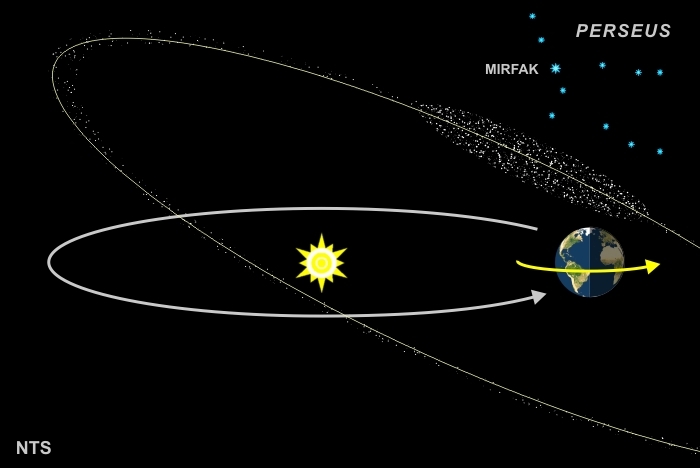 Date: August 11-12 (but activity can last for ± 1 week)
Time: midnight to dawn
Place: the northeastern sky

Get ready for the annual Perseid Meteor Shower. This year the peak of activity will be on August 11th and 12th, midnight to dawn, but you can start watching for meteors about an hour after sunset. In North and South America, when the Moon sets around 9 pm, the sky will be even darker and many of the fainter meteors should be easily visible. And if you’re lucky, you might even witness a bolide (aka “fireball”) which lights up the landscape and leaves a glowing trail in the sky.

The shower is named for the constellation Perseus, from which the meteors seem to radiate. Perseus is not a very bright constellation, but it’ll be just below the famous “W” of Cassiopeia (which is rotated and looks more like a “3” at this time). Click on the thumbnail below for an image of how the sky will appear to the northeast. 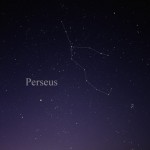 Perseid meteors all come from a stream of debris left behind by Comet Swift-Tuttle. This debris orbits the Sun, as does the Earth, but it’s orbit is elongated and tilted in a different plane. Over time, debris has dispersed around the entire length of the comet’s orbit. It’s distribution, however, is far from uniform. There are places where that debris is more concentrated. When Earth passes through one of these clumps, the rate of activity can exceed a meteor-per-minute.

As the main graphic illustrates, every August Earth passes through this stream of debris. When that happens, the visual effect is much like what you see when you drive a car into rain or snow — all the drops or flakes (or meteors) seem to be coming at you from a point directly ahead. During meteor showers, that point of origin is called the radiant. In August, Earth’s motion through space is toward the constellation Perseus. So that’s where the meteors appear to radiate from, and that’s why they’re called the Perseids.

Most comet debris consists of tiny fragments of rock, metal, and ice. Many of them will enter Earth’s atmosphere with speeds up to 60 km/s (37 miles/second)! At that incredible speed most burn up from friction, ionizing the air to the point where it glows, and creating the bright streaks we call call meteors or (more commonly) “shooting stars.”

Next Week in Sky Lights ⇒ Light and Color at Sunset