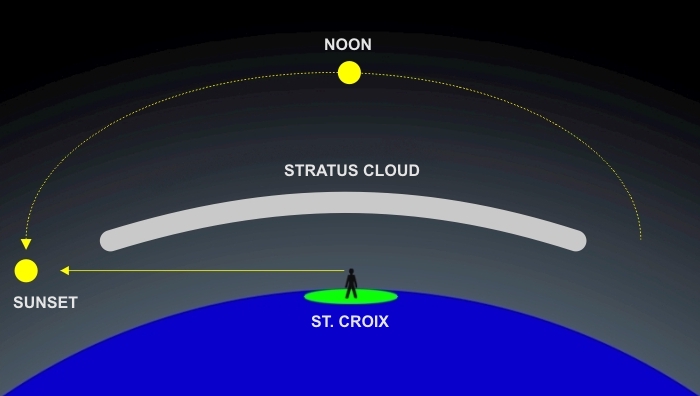 Question: We had almost total cloud cover a few days ago. It was literally brightest for five to seven minutes around 6 pm, near sunset. That was the only time the Sun came out. It was like a prolonged solar eclipse. I believe that for the brightest part of the day to occur at 6 pm has to be a rare event. It was as if someone had turned on a light at that time, and then that light rapidly went out. Is there a name for this phenomenon? — AG, St. Croix, US Virgin Islands

Answer: This is not as rare as you might think, AG. It depends a lot on your local meteorology and geography. I’ve never been to St. Croix, but according to this website you get most of your rain during September through November, with an isolated spike in May. So that’s probably the same months you get your most overcast skies.

Seeing the Sun for only a few minutes around sunset might seem highly unusual, but only requires some basic geometry. As shown in the graphic, if there’s a continuous layer of clouds (often of the stratus variety) overhead, they can block the Sun from view for most of the day. Under these conditions, one often sees spectacular crepuscular rays as the Sun nears the bottom of the cloud layer. Click on the thumbnail below for an example. 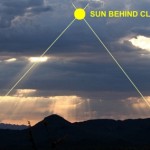 The typical altitude for stratus clouds is around 1500 meters (5000 feet). For an observer standing at sea level with an unobstructed view, the distance to the horizon is about 5 km (3 miles). Of course, if you’re up on a mountain top, that distance can be much greater. So for a sea level observer, it only requires a layer of clouds 10 km (6 miles) wide to totally hide the Sun for an entire day. When this happens, we say the sky is overcast.

When the cloud cover is not total, and leaves an opening in the right place, the Sun can appear momentarily just before it sets or just after it rises. Based on your description, I believe this is essentially what you saw. When the sun slips under the cloud deck, those clouds reflect and scatter its light. The entire landscape can light up with an eerie orange-red glow. The effect is even more spectacular over water, which reflects light much like a mirror. Click on the thumbnail below for a Southwest Desert example I photographed last year. 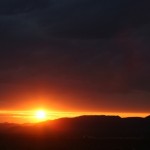 You ask if there’s a special name for this phenomenon, but to my knowledge there is not. It probably should have a name, since it can be spectacular to witness. I’m not “in charge” of making up names for meteorological phenomena, but if I were, I’d call it delayed sun apparition. Using Latin (as is common for scientific labels), that would be dilata solis effigiem.

As the great physicist Richard Feynman liked to say: Just because you know the name of something doesn’t necessarily mean you understand it. Hopefully, even without an “official” name for this phenomenon, it now makes more sense.

Next Week in Sky Lights ⇒ The 2013 Perseid Meteor Shower