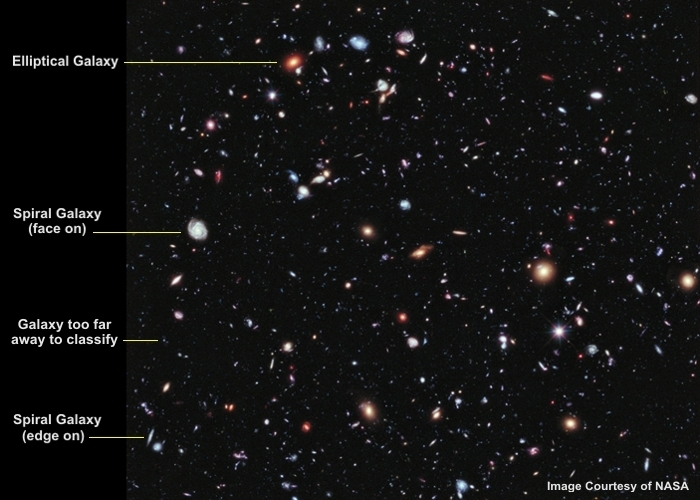 This image is our current deepest view into the Universe. NASA calls it the Hubble Extra Deep Field (XDF). As the late great Douglas Adams accurately noted in The Hitchhiker’s Guide to the Galaxy, “Space is big. You just won’t believe how vastly, hugely, mind- bogglingly big it is. I mean, you may think it’s a long way down the road to the chemist’s, but that’s just peanuts to space.” In today’s post, I’ll try to explain just how “big” space really is. Fair warning: to really grasp the answer, you’re going to have to wrap your brain around some extremely large numbers.

That Hubble Space Telescope (HST) image shows a tiny patch of sky, much smaller than the Full Moon. See this link for a visual comparison. The image shows only one 30-millionth of the total sky, but contains around 5500 galaxies. And each of those galaxies contains around 100 billion to 100 trillion stars. Space is indeed mind-bogglingly big.

A few points of light in that image are actually distant stars in our own Milky Way Galaxy. But astronomers pointed the HST in a direction that contained very few Milky Way stars, so it’s kind of a “hole” in our galaxy where the HST could look out into the deep space beyond. Extrapolating from this image, the Universe must contain somewhere around 170 billion galaxies and 1 septillion stars. A septillion is 1 with 24 zeroes after it. That’s a LOT of stars. 1 septillion looks like this:

My April 15, 2010 post estimated the Universe had “only” 80 billion galaxies, and “only” 32 sextillion stars (that’s three less zeroes than a septillion). If you’re curious about how all these large numbers are named, go here. But the fact is, as our telescopes become more powerful, and we see farther into space, those numbers keep getting revised upward.

Note this is just the visible Universe. Some galaxies are so far away that their light hasn’t had enough time to reach Earth. The Universe is 13.7 billion years old, so the light from galaxies farther than 13.7 billion light years hasn’t yet arrived, but more galaxies “appear” daily. HST stared at this tiny area for nearly 25 days, accumulating that faint light in its sensors. The XDF reaches out to 13.2 billion light years, but there must be even more galaxies beyond that “horizon.”

I think the more interesting question is: How many planets are there in the Universe? Recent results from the Kepler Space Telescope (and other theoretical analyses) suggest the average number of planets per star is “greater than one.” That’s the official mathematical statistics. But most astronomers believe the number is much higher … maybe 3-5 planets per star.

And the total number of planets is directly related to one of the most profound questions we can ask: Are we alone in this vast Universe? Or are there other intelligent civilizations out there asking the same questions?

With some 4 septillion planets in the Cosmos, whatever odds you assign to the chance of intelligent life evolving (and you can’t assign zero, since we exist), multiply those odds by 4 septillion. Astronomers use the Drake Equation to calculate the probability of intelligent civilizations beyond Earth. And I believe there are “more than one” exo-astronomers out there doing exactly these same calculations.

Next Week in Sky Lights ⇒ What Causes Tides

Q&A: Where Stars Come From
Q&A: What Causes Tides
HOME