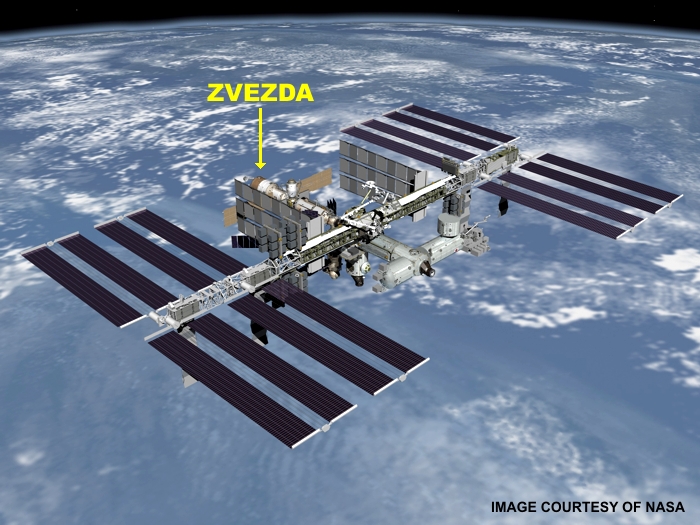 Question: How does the International Space Station stay in orbit? Isn’t gravity always pulling it downward toward Earth? And if so, do they have to do anything special to keep it floating up there in space? — BT, Minoqua, WI

Answer: The International Space Station (ISS), like all other objects in orbit, experiences a slight amount of air drag, even at an altitude of hundreds of kilometers. The air gets pretty thin up there, but it’s still enough to cause friction and gradually reduce the speed of any orbiting object. Left unchecked, that loss of speed would eventually cause the ISS to fall back to Earth in a meteoric reentry and break up. That’s exactly what happened with Sky Lab back in July 1979.

So every once in awhile they need to boost its orbit back to where it should be. They also sometimes change the orbit in other directions to avoid being hit by dangerous pieces of space junk. There are two ways to do this … either by using an onboard thruster in the Zvezda Module (see graphic), or the engines of a spacecraft docked with the ISS. Note that the Zvezda Module is on the aft end of the ISS, opposite its direction of motion.

Zvezda is always kept fueled for such purposes, and that fuel is re-supplied as needed by scheduled cargo shipments. Using a docked spacecraft is a “backup plan.” That can only be done if the spacecraft has fuel to spare, and they don’t usually carry much more than they need since unburned fuel is extra weight.

The fuel used by the Zvezda Module is a highly reactive combination of nitrogen tetroxide (N2O4) which acts as the oxidizer, and monomethylhydrazine (CH3NHNH2) which is what gets oxidized (burned). NASA uses that fuel on many spacecraft because it’s hypergolic — the two compounds ignite on contact, providing high reliability and no need for a “spark plug.”

By the way, your description of the ISS as “floating” is not quite accurate. It has a current total mass of over 400,000 kg, and is pulled downward by gravity with a force of 4 million newtons (about 1 million pounds). Gravity extends to that altitude (and beyond), and is only a few percent less than at ground level. So what keeps the ISS from falling back to Earth?

Answer: The ISS is continuously falling toward the Earth. But its extreme horizontal speed of 27,724 kilometers per hour (17,227 mph) ensures that by the time it falls that distance the ISS has also moved over 8000 km (5000 miles) horizontally. And that’s just far enough to “miss” hitting the Earth and carry the ISS over the horizon. One might say the ISS is falling around the Earth, and gravity is what holds it in a circular orbit.

That’s a tough concept wrap your head around … how something can be falling toward the Earth and never hit it. So I did an animation of a Space Shuttle orbit that might help you see how this can be. It will take a few extra seconds to load, but it’s worth the wait. The height of the Shuttle orbit is exaggerated for clarity. As you watch it, repeat this mantra:

So in the same 6 minutes it would take to free fall 640 km (400 miles), the ISS moves 8000 km (5000 miles) horizontally. Those two motions occur simultaneously, and the result is a smooth circular orbit. At higher altitudes gravity is weaker, and less horizontal speed is required to maintain orbit.