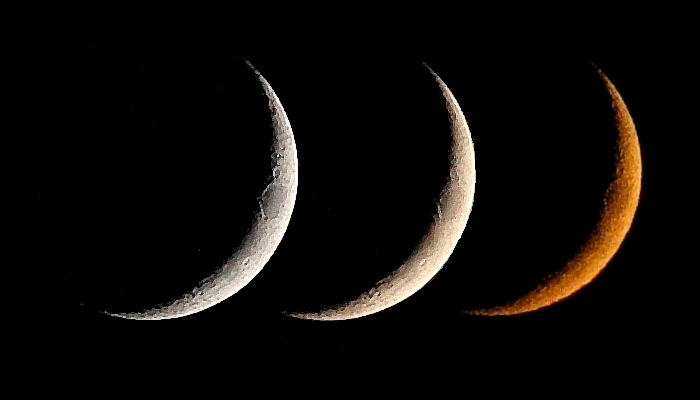 Question: I saw this really thin Moon right after sunset. But when I came back outside about half an hour later, the Moon had changed from its usual grayish color to almost orange. What made that happen? — DS, Carbondale, CO

Answer: What you saw is a common effect, frequently visible as the Moon (or Sun) sets. I’m sure you’ve noticed how, at sunset, the Sun looks more orange than when it’s higher up in the sky. The same thing happens at sunrise and moonrise, but those equally beautiful displays are on the opposite side of the sky.

The sequence of three photos above (from left to right) shows the young Crescent Moon 30, 20, and 10 minutes before it set in the west. I got those photos through a 200 mm telephoto lens on my Canon EOS 20D. You can notice two main changes in appearance on the way to moonset.

First, the Moon goes from its usual grayish color, to an ochre color, and finally to a definitely orange color. Second, the details on the Moon get “fuzzier” as moonset approaches. Both effects have the same cause.

The lower the Moon (or Sun) gets in the sky, the thicker the air its light must travel through to reach your eyes. I wrote about something called atmospheric extinction in my February 4, 2013 Sky Lights. This is what causes the Moon to look “fuzzier” at it drops lower toward the horizon. We think of air as being transparent, but it’s only partly so. Note how the detail visible on that large “crater” (actually Mare Crisium) near the center of the crescent degrades toward moonset.

The change in color from gray to orange is a result of the thicker air scattering more blue light, leaving more of the orange and red to reach your eyes. There’s a good diagram showing how this happens in my July 1, 2011 Sky Lights.

So what you saw was a perfectly normal effect. It just takes more than a single glance to notice it. Astronomers spend a lot of time watching the sky, so they notice when something changes. In fact, that’s really the best way to start learning astronomy — get yourself a planisphere, go outside after sunset, and watch the sky change.