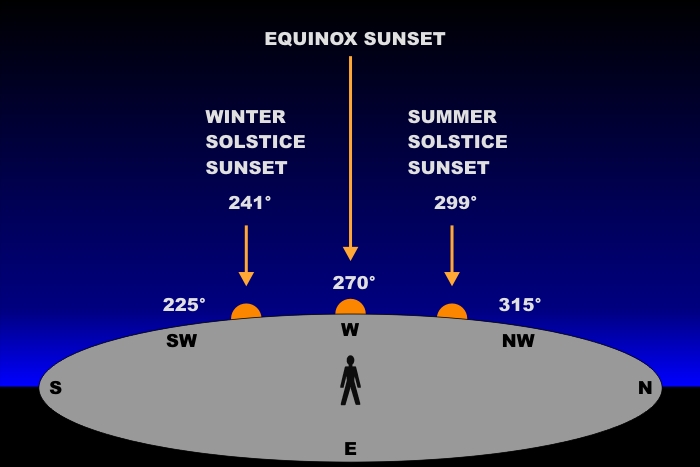 Question: I noticed on my calendar yesterday that something they call the Winter Solstice is going to happen on Friday, December 21st. What exactly is that, and will I see anything special going on in the sky? — RS, Flagstaff, AZ

Answer: Yes indeed, a yearly celestial event known as the Winter Solstice will occur on December 21st. Whether you’ll see anything “special” depends on how careful an observer you are. You’ll probably hear about the solstice from your favorite weather person, but typically with an over-simplified (and sometimes incorrect) explanation.

The path the Sun appears to take through the sky shifts slowly from season to season. This shift causes the sunrise and sunset points to move north and south along the horizon. We all learned in school how “the Sun rises in the east and sets in the west.” That’s only approximately true. West is 270° on the compass, but the Sun only sets at 270° on the Spring and Fall Equinoxes. At other times it sets north or south of true west. Same with sunrise at 90° in the east.

* Things get a little more complicated near the poles, but that’s a topic for a future post.