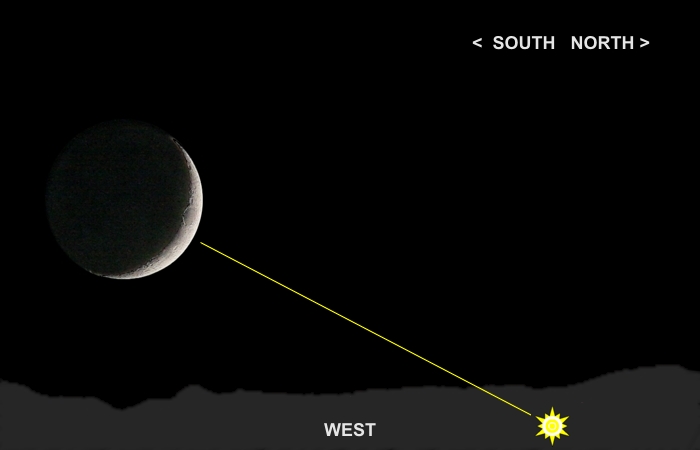 The image above shows what astronomers call a Waxing Crescent Moon. I shot this photo 3 days after our last New Moon. Mountains and (set) Sun were pasted-in to help orient your view. When the Moon is New, it’s between the Sun and Earth. We can’t easily see the Moon at that point, since its sunlit side is facing away from us. Check out this diagram for some excellent visualizations of Earth-Moon-Sun geometry over the entire lunar phase cycle.

But above, after 3 days of eastward motion, the Moon has evolved far enough past its New phase to display some of its sunlit side. These very thin Waxing Crescent Moons are also known as young Moons. Since the lunar phase cycle begins at New Moon, the Moon in the photo is “young” in the sense that it was just recently born anew.

To see a really young Moon, say, less than a day after its New Phase, you need near-perfect conditions. Good vision, clear sky, a dark observing site, and an unobstructed view of the horizon are all necessary. An orientation of the Moon’s orbit perpendicular to the horizon (so the crescent looks like a “smile”) also improves visibility. That orientation, which happens near both Equinoxes, places the young Moon higher above the horizon and makes it easier to locate. Many amateur astronomers enjoy attempting extreme young Moon sightings, seeking to better their own and others’ records.

Spotting a Moon less than than 24 hours old is considered a very difficult observation. The record claimed for the youngest Moon seen by the unaided eye is about 15 hours. Of course, for uncorroborated visual sightings, you have to take the word of the observer. Photos are better proof. Take a look at this image showing an even younger (thinner) crescent than my feeble attempt. It shows the Moon a mere 20 hours after New.

The unbeatable world record is held by Thierry Legault. Using special equipment, he photographed the New Moon when it was zero hours old, passing (almost) exactly between the Sun and Earth. I have to say “almost” because, if the Moon were exactly between the Sun and Earth, we’d experience a solar eclipse. But since the Moon’s orbit is tilted with respect to the plane of Earth’s orbit, the New Moon normally passes above or below the Sun in the sky.

And that’s exactly how Legault bagged the record for youngest Moon. See his remarkable image here.

The Colors of Rain
Atmospheric Display with Moon and Clouds
HOME