I was on my deck the other night, watching what I hoped was the last storm of a lengthy monsoon season. The rain was falling about 10 miles southwest of here, but I was under clear skies. It’s not at all unusual to see such localized rain when you live on the side of a hill, 1000 feet above the desert floor.

The Sun was just starting to set. I had my camera ready for what I expected would be a typically beautiful Arizona sunset, but ended up photographing the rain instead. There was a beautiful interplay of water and light unfolding as the falling rain was illuminated by the changing colors of the setting Sun.

The above animation consists of two images, joined and looped with a soft transition. The images were separated by about 20 minutes. Note the small hilltop in the lower left corner, which is fixed between the frames. At first, the rain looked gold in color as it caught the rays of the setting Sun. But as the sunset progressed, and the sunlight shifted to a more reddish hue, so did the rain. The rain also moved northward over the desert as it gradually changed colors.

Now Sky Lights isn’t just about pretty pictures. It’s about understanding what you see in the sky, day or night. So I’d be remiss if I didn’t explain that beautiful color change in the rain. I’ve written about how sunsets often display a progression of colors from yellow through deep red. See this post: Why Some Sunsets are Not Red.

And that’s what was happening here. Rain drops are intrinsically colorless and almost perfectly transparent. They’re also excellent at scattering sunlight, so any light that strikes them can be reflected to your eyes (or camera). Thus, when we speak of “red rain,” what we’re really referring to is the color of light the rain is reflecting. It’s the same effect that produced the unusual Pink Snow we discussed back in April.

Disclaimer: I have to say “just about” because of optical illusions. For example, in the image below, the dots between the squares appear to alternate between black and white. Click on the thumbnail to enlarge for better effect. That phenomenon happens inside your brain, and cannot be photographed. Your eyes send the brain what they receive, but the sensation of sight occurs in the brain after processing by the visual cortex. Optical illusions prove that the visual cortex can be tricked by certain geometric shapes and patterns. 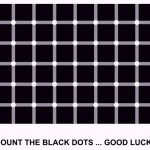 Science is only beginning to understand the complexities of the eye-brain system. One thing is quite clear: just because you “see” something doesn’t make it “real.” That’s good to be aware of, whether you’re a scientist, an artist, or a casual observer of natural phenomena. To paraphrase Einstein, “Nature is not malicious, but She can be subtle.”