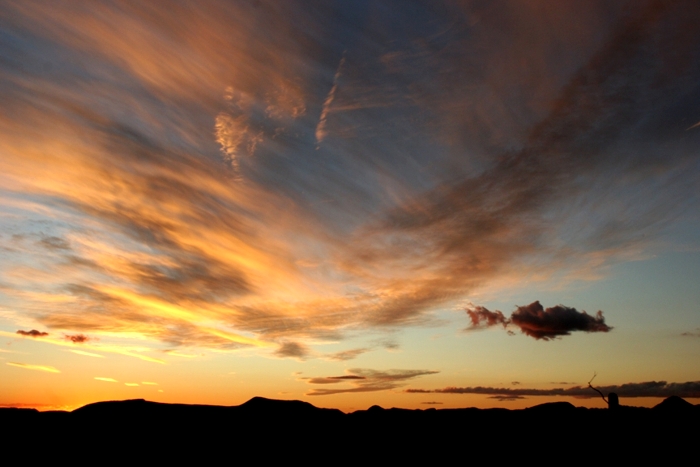 We’ve all seen clouds shaped like animals or faces or other recognizable objects. Ever wonder what makes that happen? The short answer is: Clouds are often shaped by highly random air motion. So if you look at enough clouds, sooner or later you’ll see one that looks like something familiar.

All clouds are governed by the laws of physics. Those gigantic thunderheads that build up during storms are shaped by the well-understood process of convection. In that case, the upward rush of warm air creates their classic “anvil” appearance. But sometimes cloud shapes are unusual. For example, see Lenticular Clouds and Pigs Can Fly.

The image above shows some interesting cloud shapes driven by both laminar (smooth) and turbulent (rough) air flow over the mountains 10 miles west of my home. Most of our weather comes from the west, which is the prevailing wind direction in this part of the country. When the wind hits those mountains, turbulence happens.

In that image you can see one cloud (at lower right) that looks something like a tropical fish. Above that, there are more linear streaks of clouds too high up to be affected by the mountains. The interplay between laminar and turbulent flow generates all those complex and beautiful cloud patterns.

But the human eye-brain system is almost too good at seeing patterns. That’s why many people believe the Face on Mars was built by an alien civilization, and isn’t just a natural geologic feature. Did you ever lie on your back, stare at a textured ceiling, and see a familiar face in the shapes? That’s your eye-brain system at work.

Let’s try a quick experiment. Watch this video of random “white noise.” It’s the same thing you see on a TV when it’s not tuned to a valid channel — what’s often called “snow” or “static.” The video only runs 10 seconds, so loop it a few times to give your eye-brain a fair chance to process it. Do you see anything in that video? I do, but won’t say what, since that would bias your perception. Virtually everyone sees something in random video noise.

And that’s why, if you look at clouds often enough, you’re bound to notice some that look like familiar objects.

The Blue Marble
Conjunction of Saturn, Mars, and Spica
HOME