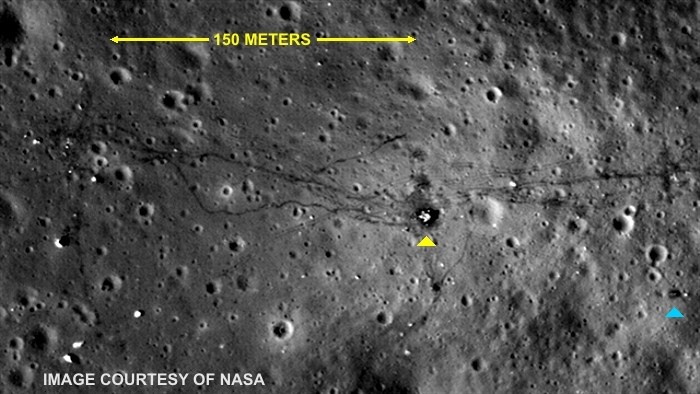 I find it amazing how some people still claim we never went to the Moon. They say the photos and videos were staged for political reasons, and shot at some top-secret facility. The Moon Hoax conspiracy rumor goes back to the late 70s, and is still alive and well in the popular media and online. Do a search for “moon hoax” and you’ll get some 1.5 million hits, most debunking the rumor. Unfortunately, you’ll also find a surprising number still supporting it.

Now, thanks to NASA’s Lunar Reconnaissance Orbiter (LRO), we have high resolution images of the lunar surface. These images show the landers and rovers the astronauts left behind. No, you can’t quite see the US flag they planted, but you can see it’s shadow. [Scroll down to the bottom of that link to see a time-lapse sequence.]

The image above shows the December 1972 Apollo 17 landing site in Taurus-Littrow Valley. The resolution of this amazing image is about 0.5 meters/pixel. The Challenger lander they left behind (yellow Δ) is about 10 pixels wide. The lunar rover (blue Δ) is about half that size. Both objects are clearly visible.

But it’s the tracks left behind by the astronauts that makes this such a convincing proof. Note the darker meandering lines leading to and from the lander. The astronauts had lots of work to do, setting up experiments and gathering rock samples. Their boots disturbed the light surface dust, exposing darker material below.

Those tracks are still visible after 40 years. Eventually, they’ll be covered by fine dust falling in from space. But since the Moon has no atmosphere (weather), the tracks will still be there tens of thousands of years from now.

It’s been suggested that, when the Moon is colonized, this and other landing sites will be designated historic monuments. Elevated walkways would protect the tracks and artifacts. This site is especially historic. Apollo 17 was the last in that series of missions. And no, despite what you might have heard, there was no “secret” Apollo 18 mission.

With the “lander” left behind, you might wonder how the astronauts ever got back. The lander had two parts: a descent stage and an ascent stage. The astronauts rode that ascent stage back up to lunar orbit to join the command module for the trip back to Earth. Before ascent they parked their rover about 120 yards away, and aimed its color TV camera at the lander. That old video is a bit grainy, but shows the separation of the two stages during lift-off. Click on the thumbnail to enlarge. If you want to see the actual video, go here. 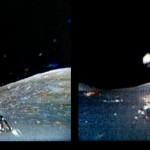 So will these LRO images finally put to rest that whole Moon Hoax conspiracy rumor? Unlikely, even though these images constitute the best proof yet that we walked on the Moon. People who believe in conspiracies are hard to reason with.

Check out this confrontation between conspiracy advocate Bart Sibrel and Apollo 11 lunar module pilot Buzz Aldrin. Sibrel calls Aldrin a lier and a thief, and accuses him of exploiting the “hoax” for personal gain. As you’ll see, even at age 82, Buzz still packs a mean right hook.

Post publication edit: I’ve changed that link in the preceding paragraph a couple times already. Apparently there are some copyright issues, and the hosting websites keep removing the video. However, an online search for video using the search terms “buzz aldrin bart sibrel” will still turn up copies, unfortunately many with ads.