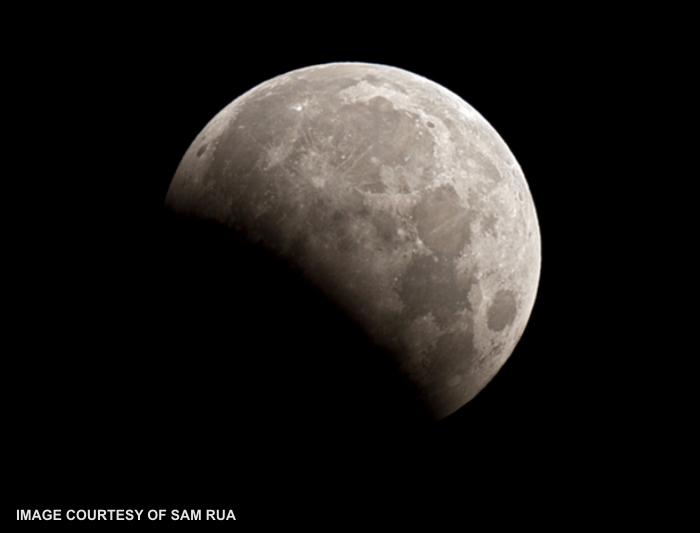 Between the May 20th annular eclipse, and the June 5th Venus transit, most media overlooked another celestial event that happened on the morning of June 4th. On that date, the Moon moved into the Earth’s shadow. That shadow extends some 850,000 miles into space. At the distance of the Moon (240,00 miles), the shadow is about 3 times the Moon’s diameter, and was clearly visible on the lunar surface. What we saw is called a partial lunar eclipse.

I should note that these 3 astronomical events were not causally related. They each repeat on their own cycles, and this celestial “trifecta” was a mathematical coincidence. In fact, yet another celestial event (also unrelated) occurred just last week on June 20th: The Summer Solstice.

The photo above was taken by Sam Rua of Tucson, Arizona. He’s an accomplished photographer, and much of his work slants toward capturing the beauty of natural phenomena. Sam was kind enough to grant me permission to use his partial lunar eclipse photo. You can see some of his other work at: http://www.pbase.com/pegsam

To the casual observer, this partially eclipsed Moon might appear to be simply a normal phase in the Moon’s regular monthly cycle. To the keen-eyed observer, two things are different. First, the curve of the shadow bends the wrong way for a phase. See my post on that topic here.

The other difference is that the edge of the shadow is “fuzzy,” unlike the sharp crisp edge of normal phases (which are effectively caused by the Moon shadowing itself). More about that also at the link above. This “fuzziness” is the shadow of Earth’s atmosphere, which diffuses sunlight along the shadow’s edge.

There’s one other difference that you might or might not see, depending on global weather and cloud cover. Earth’s shadow often has a distinctly brick-red hue. As sunlight slips around the edge of Earth, passing through its atmosphere, the light from sunsets all around the globe is “projected” toward the Moon. Your eyes won’t see much of that effect in Sam’s image, because the unshadowed part of the Moon is so bright. But my graphics software can detect some red.

Popular folklore claims people believed Earth was flat until Magellan sailed around it. That’s totally false. The ancient Greek geometers had deduced, from the shape of Earth’s shadow on the Moon (and some other clues), that Earth had to be round. Pythagoras had it all worked out by the 6th century BC. But the flat-Earth myth persists.

Even today, in 2012, there still exists a Flat Earth Society (FES). See: http://theflatearthsociety.org/cms/. It’s kinda hard to take them seriously, especially now that we’ve been into space and seen Earth’s spherical shape. But apparently there are those who believe that’s all part of a conspiracy, not unlike the Great Moon Hoax. If you follow the FES link to the forums on their website, you’ll see they actually have their own theories to answer questions like: If the Earth is flat, why doesn’t the water run off the edge?

One of the reasons I take the time to write Sky Lights is pure education. It’s gratifying to receive a question from someone who really wants to understand something they’ve seen in the sky. And as a former teacher of science, I can hardly resist answering. But I don’t expect I’ll be hearing from the FES anytime soon.

Q&A: Why Orbits are Not Circular
Q&A: Linear Orbits
HOME