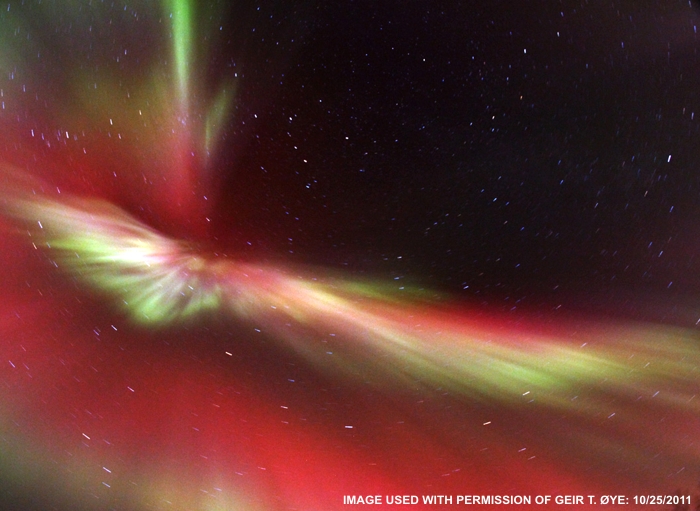 Question: I saw this spectacular display of the Northern Lights many years ago. It was a deep red color, like the sky was bleeding. You could even see it moving. We stopped the car to get out and watch, with jaws dropped. I wish I’d had my camera. What exactly is that stuff?  — CH, Milwaukee, WI

Answer: What you likely saw was a rare display of the Aurora Borealis (aka Northern Lights). In the southern hemisphere, they’re called the Aurora Australis. Most of the time, auroras have a greenish-yellow color. Red and blue are more rare. Which colors are produced depends on the amount of energy involved.

This all takes place very high in the atmosphere, from 50 miles on upward. When the Sun fires off a burst of high energy particles (which it does quite often), they can be channeled by Earth’s magnetic field toward the north and south poles. This is why auroras are usually seen only at high latitudes.

The photo above was taken in Norway by Geir Øye, who graciously allowed me to use that image. In his photo, Geir captured a rare multicolor aurora. He has many beautiful aurora photos on his website, along with other astrophotography. See more of his outstanding work at: http://www.skyoye.com/index.html

Whatever their color, auroras can also be seen from outer space. From that vantage point, it’s more obvious that auroras are high-altitude phenomena. The image below was taken from the International Space Station (ISS) last year. The ISS orbits at an altitude of 200-250 miles. Click on the thumbnail to enlarge. 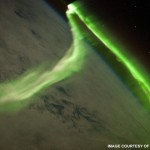 The above image is just one frame from an amazing video. See it at: http://www.youtube.com/watch?v=ogtKe7N05F0

Auroras figure heavily in many mythologies. The word “aurora” is Latin for “dawn,” and for the ancient Romans, Aurora was the goddess of dawn. In early cultures of the far north, what is now Alaska, Canada, and Greenland, the aurora was thought to be the fire of torches leading the way to the afterlife for spirits of the dead.

One final note. There are anecdotal accounts of people hearing the aurora, though nobody has yet managed to record the sound. It’s described as sounding like “radio static” or “cellophane crumpling,” but it’s very faint. More interesting, I think, is what auroras sound like to a radio receiver. It’s just plain eerie. Check out this radio wave recording by sound specialist Steve McGreevy: http://www.youtube.com/watch?v=eHvdZdsIZxg

The Hunters and the Hunted
My Worst Astrophotograph (So Far)
HOME