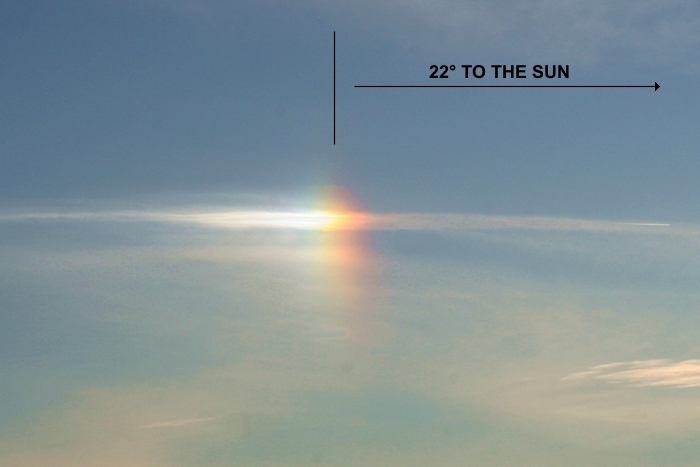 Winter weather brings clouds bearing ice crystals. Those clouds often create Sun Dogs, a beautiful optical effect so named because they follow the Sun — like a dog follows its master. The photo above was taken 15 minutes before the photo below, as the Sun descended through the clouds. I’ve written about Sun Dogs [Oct 10, 2011 & Oct 11, 2006], and I’ve seen them many times, but on January 12th, near sunset, I photographed the brightest Sun Dog I have ever seen. 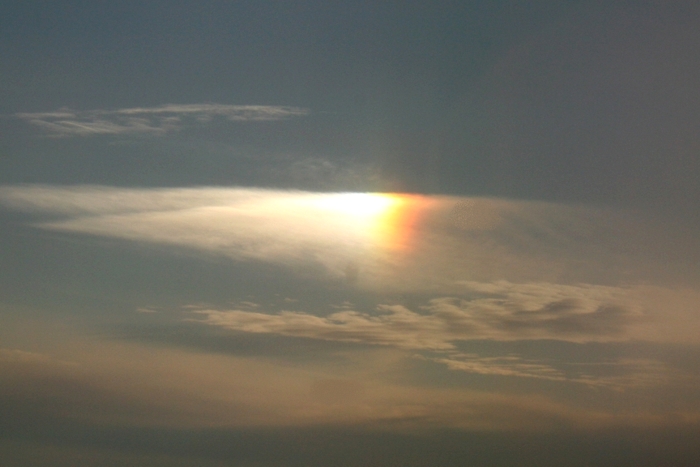 Sun Dogs, aka parhelia (Greek for “beside the Sun”), are similar to rainbows in that they can display all the colors of the spectrum. But they typically show only red/orange/yellow. And unlike rainbows, which are always opposite the Sun in the sky, Sun Dogs appear around 22° to either side of the Sun. Sometimes you see only one, as in this case. More often you see two … it all depends where the ice crystals are.

If you want to understand the physics of Sun Dogs, go here. What it comes down to is, light from the Sun is bent by ice crystals in the clouds. This process (called refraction) also separates the colors. These ice crystals are flat, hexagonal, and floating horizontally. They can “float” because of their tiny size, just like the liquid water droplets in a normal cloud. Sun Dogs are often overlooked, since they’re (usually) not as bright as rainbows, and they’re near the Sun in brighter sky. But this is the time of year to watch for Sun Dogs, given freezing air temperatures lower in the atmosphere.

The best way to spot them is to block your direct view of the Sun with the edge of a building, a pole (cactus work nice), or your hand. Then look about two fist-widths to either side of the Sun (about 20° at arms length for most people). Of course, there must be clouds at these locations, and those clouds must contain ice crystals.

I’ve found that viewing Sun Dogs through polarized sunglasses enhances the contrast. In fact, the second photo was shot using one lens of my sunglasses held in front of the camera to act as a filter. That’s why the sky looks darker. The Sun Dog was intrinsically brighter in that lower cloud.

What made this particular Sun Dog so bright? It was most likely a large number of ice crystals in that cloud, combined with relatively still air, and thus well-aligned crystals. If turbulence or wind randomizes the crystal orientations, then you get a 22° halo instead of two well-defined Sun Dogs.

Discussion of “My Brightest Ever Sun Dog”