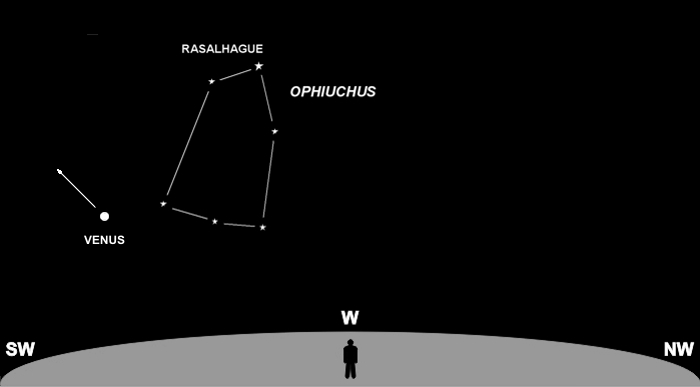 Question: There’s this really bright star in the west around sunset. It wasn’t there a couple weeks ago, but now it’s there like every night. What is that? – DS, New River, AZ

Answer: What you’re seeing is the planet Venus. You’ll easily spot it as soon as it gets dark, since it’s the brightest object in the West. In fact, it’s so bright you can even see it during the daytime (if you know exactly where to look). Over the next few weeks, you’ll see it move along the arrow relative to the constellation Ophiuchus. If you keep checking at sunset, Venus will reach its maximum elevation in January. After that, it will reverse direction and head back west, setting earlier every night.

When Venus is east of the Sun, as it is now, it’s called the Evening Star. Next to the Sun and Moon, it can be the brightest object in the sky. But it’s not really a “star” … it’s a planet.

After January, as Venus moves to a position west of the Sun, it will become the Morning Star. At that time it will be visible in the East before sunrise (if you get up that early). See the geometry here.

That’s the thing about planets. The word “planet” means “wanderer.” Ophiuchus, a constellation, is made of stars, and never changes its configuration. It just keeps drifting west by about 1 degree each day, along with the rest of the stars. Planets move less regularly, and that’s one of the ways we can recognize them.

Planets also vary in brightness by a large factor. Venus hits its point of maximum brightness on April 30, 2012. I’ll be sending a reminder at that time. Seeing Venus at its brightest is an amazing thing. No wonder it’s the most commonly reported “UFO.” It gets so bright that even casual observers notice it.

If you can look at Venus with binoculars or telescope, please do. You’ll see Venus goes through phases just like the Moon. Galileo first saw that curious phenomenon in 1610, through the telescope he invented. Those observations demonstrated that Venus orbited the Sun inside Earth’s orbit, and supported the heliocentric theory of Copernicus.