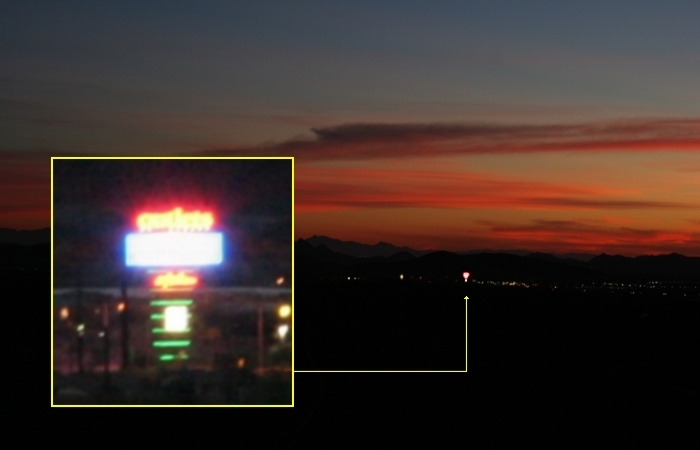 This photo was taken by Roger Serrato, Desert Foothills Astronomy Club Treasurer. It’s the view from the deck at my home in New River. I shot the inset through my telescope. It highlights the newest challenge to preserving our dark night sky. It’s one of those annoying electronic billboards that seem to be springing up just about everywhere. Here, it distracts from an otherwise beautiful sunset.

Officially, they’re known as CVEMS (continuously variable electronic message signs), EBB (electronic billboards), or EMD (electronic message displays). They’re very popular with advertisers, since they can rotate ads from multiple clients. And the ad content can be changed via a PowerPoint-like computer interface instead of using the traditional crew with ladders, paper, and glue. They’re also extremely bright. Therein lies the problem, at least for those who do astronomy, or simply enjoy an unpolluted view of the night sky.

A properly designed traditional billboard has shielded lights on top pointed downward to illuminate the ad. But on a CVEMS, the entire surface emits light. It’s covered with red, green, and blue LEDs, much like those Jumbotron displays at sports venues. Selective lighting of these LED “pixels” produce the images, kinda like your RGB computer monitor or TV produces color images.

The result is that, even though CVEMS are meant to be read by people at ground level, they emit a significant amount of light above horizontal. As proof of that assertion, the photo above was taken from a location 300 feet higher than the level of the sign. All that above-horizontal light makes its way up into the sky, adding to the other stray photons that create light pollution. The thumbnail below shows what is called the light dome over Phoenix, as seen from my home 40 miles to the north of city center. Click on it for a larger view. 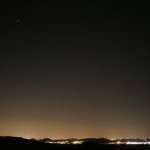 Bear in mind this is how the light dome looks on a “good” night. It’s much worse if there’s clouds over the city to scatter additional light. The light dome in this image is from upwards-directed light scattering off dust and smog found in the air above any major city. Most of that light comes from billboards, sports events, over-lit parking lots and malls, and unshielded yard lights. Street lights are less a problem, as most are properly shielded and direct their light downward, where it’s needed. You can see maybe 2 or 3 stars, but everything else is pretty much washed out. This light dome is even visible from Kitt Peak, a major observatory complex near Tucson over a hundred miles away.

CVEMS technology is so new, it’s slipped through the cracks in existing zoning codes. All around Arizona, a state in which professional astronomy is big business, municipalities are scrambling to update their codes in an attempt to regulate this new threat to our night skies. Advertising companies and businesses are in turn scrambling to put up as many of these things as they can before the laws change. CVEMS are so expensive that existing signs will most likely be “grandfathered in” even if they violate updated codes.

Unfortunately, I don’t have a solution to this new threat. I’ve been in contact with the owners of this CVEMS, as well as the manufacturer. I’ve also spoken to people at the county Planning & Zoning office, who tell me this particular CVEMS (and most others) are running at about 300% of the brightness they really need at night. This wastes energy, and also wastes our skies. It’s the brightest light I can see from my deck.

Residents living closer to that sign have had to install opaque shades on their bedroom windows to sufficiently darken the room. That’s what is known in legal circles as light trespass, and it’s no different than other forms of pollution (fumes, odors, water run-off, or debris) that cross property lines and create a nuisance. Of course, lawyers cost money, and the proponents of CVEMS have deep pockets. Case law has already been established for light trespass (in California), so that may be the ultimate solution.

This post has been more of a rant than typical for Sky Lights. But one of the reasons I do this blog, in addition to educating readers on matters of astronomy and meteorology, is to have a “soapbox” for talking about things that concern me. And CVEMS concern me. They impact my hobby of astronomy, waste energy, and (according to the National Highway Traffic Safety Administration) have been shown to distract drivers and cause accidents. Is this really progress? I think not.

2 comments on “Light Pollution of a New Kind”