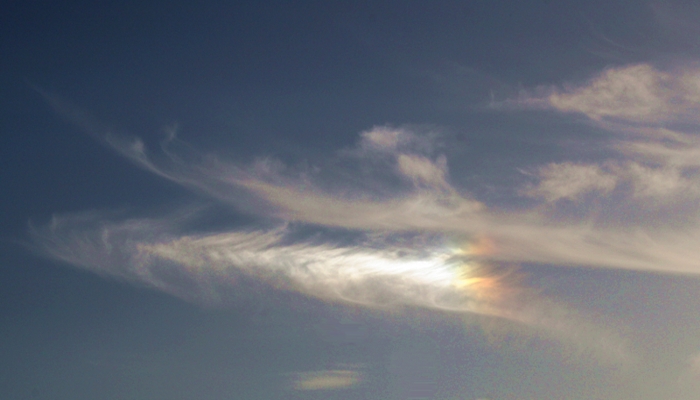 You’ll never see them in a totally clear sky, because they’re caused by ice crystals in clouds that refract and reflect sunlight. Naturally, sun dogs are more common in winter when the upper air is cooler. Even when they are present, you might not notice them, since they’re faint compared to the Sun. And you need to look toward the brightest part of the sky to see them, since they’re always 22° (two fists) from each side of the Sun, and at an equal elevation. If possible, block out the Sun by standing where it’s hidden by a pillar or cactus. Polarized shades help too.

When you do see sun dogs, the red color is almost always the most distinct, with fainter orange and yellow regions flanking it. Green, blue, and violet are there too, but rarely visible. The red part is sometimes stretched into an upward arc that can meet up with the arc from the other parhelion and form a 22° radius circle.

Compared to a rainbow, the colors seem washed out and much less vivid. The photo above is the best I have, but not the best I’ve seen. You can see better photos here. The graphic simulation in my October 11, 2006 Sky Lights greatly exaggerated the visible colors (for lack of a real photo). I’ll keep trying for a better shot. Winter is sun dog season.