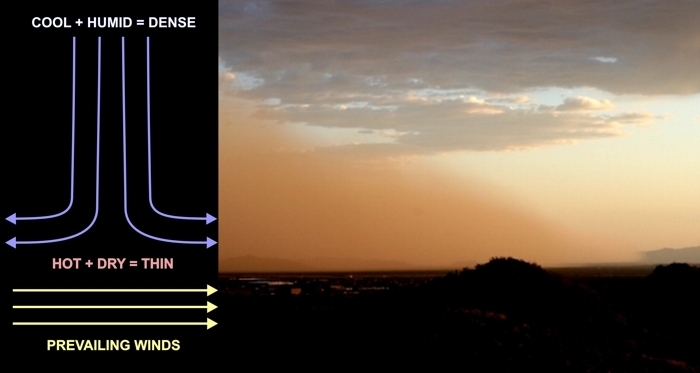 We’ve had so many this season here in Arizona that I thought the topic deserved some comment. Let’s distinguish first between dust storms and sand storms. The two are really on opposite ends of a spectrum.

It’s all about particle size. In a dust storm, the particles are very small. Smaller than a grain of sand. And some smaller than you can see. But they can still create an ominous nearly-opaque cloud as seen above.

Two totally different mechanisms can create these events. In one case, a large mass of dense air reaches a point of instability and rapidly sinks to the surface, like a rock falling through water. This downdraft of air has to go somewhere, and that direction is outwards (blue vectors in above graphic). If it moves over a dusty or sandy surface, and the wind speed is high enough, you get a dust or sand storm.

The last large dust storm that hit here in New River, Arizona was one of the largest I’ve seen. The image below is a thumbnail, but you can click on it for a full window view. Is that ominous looking or what? I didn’t have time to swap my wide-angle lens into my camera, as the dust hit within a minute of this shot. So it’s a panorama of 3 frames stitched together digitally. The dust front is about 300 meters away. 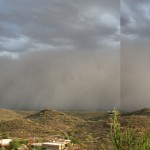 Finally, here’s a video I created from a time lapse sequence of shots taken directly west of here. One frame is 10 seconds from the last, and the video runs at real time. Based on the distance to those mountains, I estimate the dust cloud was about 2000 feet tall, and advancing at 40 mph. Just click on the screen to play the video. It’s a great shot of Mother Nature in action.

Planet vs. Star
Q&A: The Face on Mars