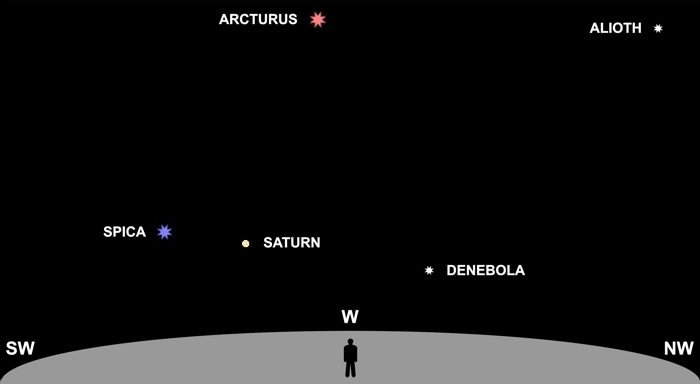 Something people often ask is how I know which dots of light are planets and which are stars.  The short answer: stars are arranged in permanent groups that never change positions relative to each other, or to other groups. We call these groups constellations. The Big Dipper is a well-known example. It always looks the same, even as it rotates around the sky. Planets, in contrast, change positions relative to other planets, and to the constellations. It’s a slow drift, and you’d need to watch for a few days to notice it.

The word “planet” comes from the ancient Greek, meaning “wanderer.” So if you know the constellations visually, any new “dots” intruding on their space must be planets. But there’s another visual cue visible for the next week or so, as planet Saturn and star Spica pass each other in the west.

Look low in the southwest about and hour after sunset to see Saturn and Spica. They are about equal brightness now, but if you look for it, you’ll see that Spica “twinkles” much more than Saturn. Twinkling is caused by refraction of light in Earth’s atmosphere. You can read more about the physics in my August 3, 2005 post.

With both objects so low in the sky, twinkling is even more enhanced. There was a time, before Galileo’s telescope, when that was the only difference between planets and stars … planets wandered and didn’t twinkle as much. But his telescope showed that stars were tiny points of light, and thus more subject to refraction. Planets, however, were larger discs of light and twinkle much less, if at all.

Those observations also got Galileo to thinking there was a physical difference between planets and stars. It was a revolutionary idea at the time. But it was the same idea Copernicus had proposed for his model solar system, with all planets orbiting the Sun, and the stars very far beyond the planets. Both, of course, were correct.

Discussion of “Planet vs. Star”