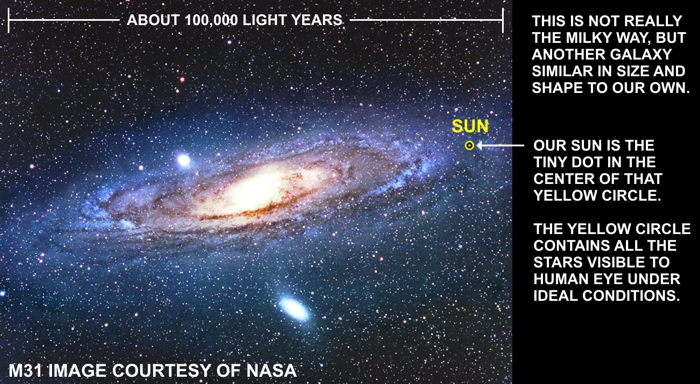 Question: Sometimes when it’s dark and clear, it seems like I can see millions of stars. And it got me wondering, just how many stars are out there? — CS, Cornell University, CA

Answer: There’s two ways I can answer that question. Let’s do the easy one first. When it’s really clear, dark, and Moonless (and these are ideal conditions), the average human eye can see 5000-6000 stars. It might seem like “millions,” but that’s best you can do if you use only your eyes. Of course, that number can be greatly increased using binoculars or a telescope. However, if you live in the city, or any heavily light-polluted area, and use only your eyes, that number can drop to 10 or less.

The second way I can answer this gets a bit more complicated, because I’m going to try to estimate the total number of stars in the whole Universe. Get ready for some big numbers. First, a measure of distance called the light year (LY) will be needed. 1 LY = how far light will travel in one year. Light is very fast (186,000 miles/second), so that distance  works out to about 6 trillion miles.

Our Sun and planets reside in a vast rotating disc of stars called the Milky Way Galaxy, about 2/3 the way out from center to edge (see graphic). Our galaxy has a diameter of 100,000 LY. All the stars you can see with just your eyes are contained in the yellow circle marking our location. The rest are simply too far away to see. The total number of stars in our galaxy is estimated at up to 400 billion.

Recent research indicates that most of these stars have planets. Planets orbiting stars other than our Sun are called exoplanets. So the total number of planets in the Universe could well be an even larger number, and that puts a whole new spin on the question: Are we alone in the Universe?