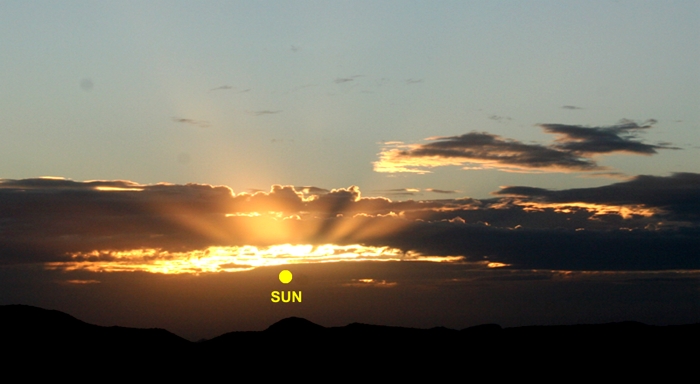 Question:  Last night at sunset I saw these “rays” coming out from the sun. Was it some kind of dangerous radiation, like UV, or what? — MC, Los Alamos, NM

Answer:  What you saw was probably that beautiful phenomenon we call crepuscular rays. In other cultures, for a few examples, it’s called “Sun drawing water,” “Buddha’s fingers,” and “the ropes of Maui.” The photo above is not the best example I’ve seen, but it’s the best photo I have so far.

The Sun is behind the lower dark cloud (the yellow disc is simulated), and its rays of light are easily seen in contrast against the upper dark cloud. Any time light passes around an obstacle or through an opening, some of it gets blocked. That’s what causes shadows.

What you’re seeing here is both light and shadow, which is what creates those streaky “rays.” The shadows are cast from the edge of the lower dark cloud and from other clouds behind it. If there’s a dark cloud behind the rays to enhance the contrast, or even a dark blue sky, the rays can be visually spectacular.

So there’s no need to worry about radiation. It’s the same sunlight that grows our plants, drives our weather, and tans our skin. In fact, since the Sun will be hidden behind a cloud whenever this happens, the UV index will be lower (and safer) than normal. Do not fear crepuscular rays … enjoy them. They’re one of the most striking displays of light commonly visible in our atmosphere.

Crepuscular rays are most commonly seen at sunrise or sunset during cloudy weather. But they can happen any time of day, whenever the Sun and clouds are in the correct relative positions.

Q&A: Canines Howling at the Moon
Q&A: The Total Number of Stars
HOME