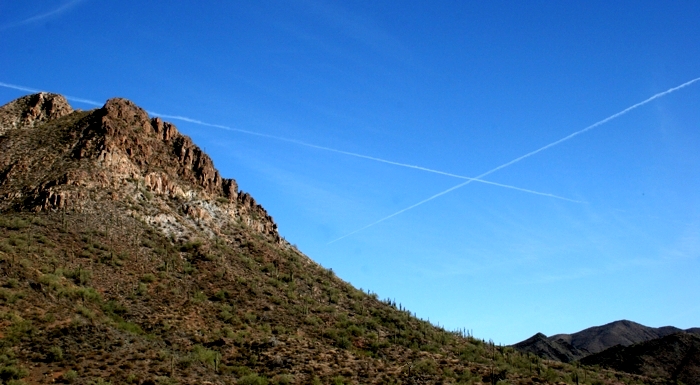 Question: Lately I’ve been seeing jets making a lot of trails in the sky. What’s up with that? Is it some new kind of fuel they’re using? — SH, New River, AZ

Answer: I believe this photo shows what you are talking about. It was taken just last week. Those white streaks are called contrails, short for “condensation trails,” and they have little to do with the type of fuel. They are literally man-made clouds.

This time of year there are often cool and moist layers of air in the atmosphere. The exhaust of a jet contains water vapor, a by-product of combustion. If it’s cold enough, this water vapor condenses into liquid drops or ice crystals. This is exactly what a “normal” cloud consists of. So contrails are just linear man-made clouds.

Also, when a jet (moving at some 500 mph) passes through cool humid layers, the air is compressed as it hits the aircraft, and then expanded after the aircraft passes. This causes water vapor already in the air to condense into a cloud, as happens naturally when air moves over a mountain. So you’ll also sometimes see these trails coming off the wing tips or other parts of the fuselage.

It looks as if the two jets almost collided, but contrails will often persist for hours, just like natural clouds. The first jet came through 20 minutes before the second one so it wasn’t even close.

Contrails are not pollution, like auto exhaust, but they do have an effect. In places with heavy air traffic, they can literally paint the sky with white stripes. And this in turn reflects sunlight back into space, partly alleviating global warming. Is that good? Well, yes and no. Aircraft are still burning fuel, even though the exhaust from modern turbine engines is not easily visible. But they do emit carbon dioxide, which is a greenhouse gas, as well as water vapor, so the net effect may be a wash. Research is ongoing.

Discussion of “Q&A: Strange Trails in the Sky”